The generic name Aphelocoma derives from Latinized Ancient Greek apheles- (from ἀφελής-) "simple" + Latin coma (from Greek kome κόμη) "hair", in reference to the lack of striped or banded feathers in this genus, compared to other jays. californica, Latin: "from California".

The California scrub jay is a medium-sized bird, approximately 27–31 cm (11–12 in) in length (including its tail), with a 39 cm (15 in) wingspan, and about 80 g (2.8 oz) in weight. In general, this species has a blue head, wings, and tail, a gray-brown back, grayish underparts, and white eyebrows. The throat is whitish with a blue necklace. The call or "screech" is described as "harsh and scratchy". 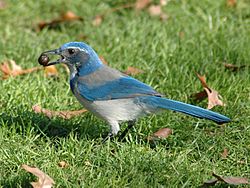 California scrub jays usually forage in pairs, family groups, or small non-kin groups, outside of the breeding season. They feed on small animals, such as frogs and lizards, eggs and young of other birds, insects, and (particularly in winter) grains, nuts, and berries. They will also eat fruit and vegetables growing in backyards. They can be hand-fed by humans.

California scrub jays, like many other corvids, exploit ephemeral surpluses by storing food in scattered caches within their territories. They rely on highly accurate and complex memories to recover the hidden caches, often after long periods of time. In the process of collecting and storing this food, they have shown an ability to plan ahead in choosing cache sites to provide adequate food volume and variety for the future. Western scrub jays are also able to rely on their accurate observational spatial memories to steal food from caches made by conspecifics. Food storing birds implement a number of strategies to protect their caches from potential 'pilferers.' Western scrub jays are also known for hoarding and burying brightly colored objects. Western scrub jays have a mischievous streak, and they are not above outright theft. They have been observed stealing acorns from acorn woodpecker caches. Some scrub jays snatch acorns from the hiding places of other jays. When these birds go to hide their own acorns, they check first that no other jays are watching.

Recent research has suggested that western scrub jays, along with several other corvids, are among the most intelligent of animals. The brain-to-body mass ratio of adult scrub jays rivals that of chimpanzees and cetaceans, and is dwarfed only by that of humans. Scrub jays are also the only non-primate or non-dolphin shown to plan ahead for the future (known as metacognition), which was previously thought of as a uniquely human trait. Other studies have shown that they can remember locations of over 200 food caches, as well as the food item in each cache and its rate of decay. To protect their caches from pilfering conspecifics, scrub jays will choose locations out of sight of their competitors, or re-cache caches once they are alone, suggesting that they can take into account the perspective of others. California scrub jays also summon others to screech over the body of a dead jay, according to new research from the University of California, Davis. The birds' cacophonous "funerals" can last for up to half an hour. 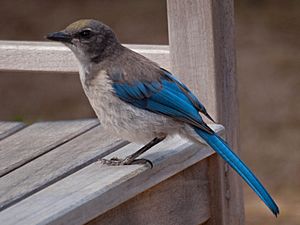 The chicks start off fully gray. The older they get, the more they turn blue. On their heads, chicks tend to have a red crest that resembles a comb. The chick will lose its crest at day seven, just like the way the baby chickens lose their egg tooth at 5–7 days. Nests are built low in trees or bushes, 1–10 m (3.3–32.8 ft) above the ground, primarily by the female, while the male guards her efforts. The nests are sturdy, with an outside diameter of 33–58 cm (13–23 in), constructed on a platform of twigs with moss and dry grasses lined with fine roots and hair. Four to six eggs are laid from March through July, with some regional variations. There are two common shell color variations: pale green with irregular, olive-colored spots or markings; and pale grayish-white to green with reddish-brown spots. The female incubates the eggs for about 16 days. The young leave the nest about 18 days after hatching.

The life span of wild California scrub jays is approximately 9 years. The oldest known western scrub jay was found in Castaic, CA, in 1991 and raised in captivity. "Aaron" lived to be 19 years, and 8 months old.

Populations are being adversely affected by the West Nile virus, particularly in California's Central Valley. 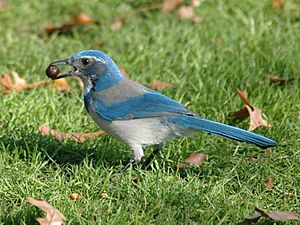 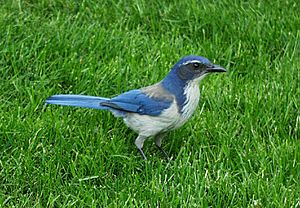 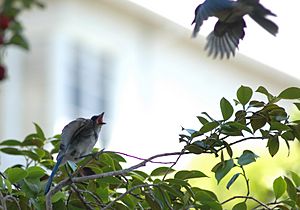 California scrub jay fledgling being fed by a relative. 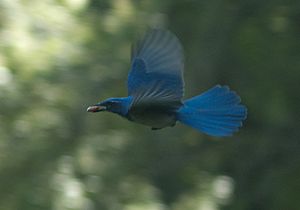 Woodhouse's, California, Island, and Florida scrub jay were once considered subspecies of a single "scrub jay" species. They are now believed to be distinct. Beyond the close relationship of the "California" and island scrub jays, resolution of their evolutionary history has proven very difficult.

Woodhouse's scrub jay differ in plumage (paler blue above, with an indistinct and usually incomplete breast band) from California scrub jay which is darker blue above with a strongly defined – but not necessarily complete – blue breast band.

The following subspecies are recognized:

From Puget Sound through the Willamette Valley to Douglas County, Oregon
A large subspecies. Somewhat duller and lighter in color than californica due to gene flow from inland populations. Blue of head and neck less purplish than in woodhouseii group. Back usually quite brownish, underside and especially breast quite whitish, undertail coverts usually tinged pale blue or gray in males. Bill strong, wings and tail fairly short.

From Jackson, Klamath, and Lake Counties, Oregon, through Sacramento and San Joaquin Valleys and surrounding mountains to Kern County, San Francisco Bay area, and Alpine County. Eastwards to Inyo County and Virginia Mountains (Washoe County, Nevada), where it intergrades with nevadae of the woodhouseii group.
Quite variable according to the extent of gene flow between this taxon and nevadae. Generally similar to californica but larger; color of head and neck varies in lightness and amount of purplish hue. Back grayish; undertail coverts usually white. Bill usually heavy but variable according to habitat type (less heavy in birds of pinyon woodland).

Only occurs in single-leaf pinyon woods on Eagle Mountain, Joshua Tree National Park.
Smaller, lighter and grayer than californica. Bill not as heavy. Apparently an isolate of hybrid origin between A. c. obscura and nevadae of the woodhouseii group.

All content from Kiddle encyclopedia articles (including the article images and facts) can be freely used under Attribution-ShareAlike license, unless stated otherwise. Cite this article:
California scrub jay Facts for Kids. Kiddle Encyclopedia.