Charge of the Light Brigade facts for kids 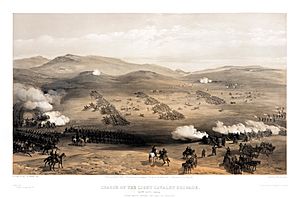 The cavalry (far) attacking the artillery (near).

The Charge of the Light Brigade was a failed military attack during the Crimean War in 1854. It was a charge by British Light Cavalry (who didn't have many weapons or armour) against Russians and their allies. The cavalry were supposed to attack regular soldiers, which they were good at, but the British leaders made a mistake and caused the cavalry to attack artillery guns, which they were not good at. It is remembered because there was a poem written by Alfred, Lord Tennyson that praised the bravery of the soldiers. It was also seen as a symbol of the failures of British rulers during that time.

All content from Kiddle encyclopedia articles (including the article images and facts) can be freely used under Attribution-ShareAlike license, unless stated otherwise. Cite this article:
Charge of the Light Brigade Facts for Kids. Kiddle Encyclopedia.