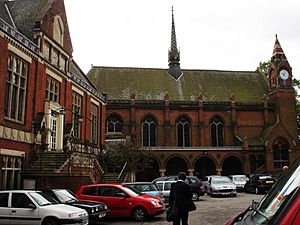 Chapel Quad, with "Big School" on the left, and the chapel

Sir Roger Cholmeley's School at Highgate (commonly referred to as Highgate School) is a private school in Highgate in North London, England. It was started as a charity called the Free Grammar School in 1565 by Sir Roger Cholmeley. It is still a charity. It is a member of the Eton Group. Girls and boys aged 3–18 go there. People who were students at the school become a part of the Cholmeleian Society.

All content from Kiddle encyclopedia articles (including the article images and facts) can be freely used under Attribution-ShareAlike license, unless stated otherwise. Cite this article:
Highgate School Facts for Kids. Kiddle Encyclopedia.