Sir Clive Marles Sinclair (born 30 July 1940) is an English entrepreneur and inventor, most commonly known for his work in consumer electronics in the late 1970s and early 1980s.

After spending several years as assistant editor of Instrument Practice, Sinclair founded Sinclair Radionics in 1961, where he produced the first slim-line electronic pocket calculator in 1972 (the Sinclair Executive). Sinclair later moved into the production of home computers and produced the Sinclair ZX80, the UK's first mass-market home computer for less than £100, and later, with Sinclair Research, the ZX81 and ZX Spectrum; the latter is widely recognised by consumers and programmers for its importance in the early days of the British home computer industry.

Sinclair Research also produced the TV80, a flatscreen portable mini television utilising a cathode ray tube, however, LCD television technology was in advanced development and the Sinclair FTV1 (TV80) was a commercial flop, only 15,000 units being produced.

Knighted in 1983, Sinclair formed Sinclair Vehicles and released the Sinclair C5, a battery electric vehicle that was also a commercial failure. Since then Sinclair has concentrated on personal transport, including the A-bike, a folding bicycle for commuters that weighs 5.5 kilograms (12 lb) and folds down small enough to be carried on public transport.

Sinclair's father and grandfather were engineers; both had been apprentices at Vickers the shipbuilders. His grandfather George Sinclair was an innovative naval architect who got the paravane, a mine sweeping device, to work. George Sinclair's son, George William "Bill" Sinclair, wanted to take religious orders or become a journalist. His father suggested he train as an engineer first; Bill became a mechanical engineer and remained in the field. At the outbreak of World War II in 1939 he was running his own machine tools business in London, and later worked for the Ministry of Supply.

Clive Sinclair was born to George Sinclair and Thora Edith Ella Marles in 1940 near Richmond, then in Surrey. He and his mother left London for safety to stay with an aunt in Devon, where they eventually travelled to Teignmouth. A telegram arrived shortly afterwards, bringing the news that their home in Richmond had been bombed. Sinclair's father found a house in Bracknell in Berkshire. His brother Iain was born in 1943 and his sister Fiona in 1947.

At the age of 14, Sinclair designed a submarine. During holidays he could pursue his ideas and teach himself what he wanted to know. Sinclair had little interest in sports and found himself out of place at school. He preferred the company of adults, which he got only from his family.

Sinclair attended Boxgrove Preparatory School, excelling in mathematics. By the time he was ten, his father had financial problems. He had branched out from machine tools and planned to import miniature tractors from the U.S.; he had to give up the business. Because of his father's problems, Sinclair had to move school several times. After a time at Reading School, Sinclair took his O-levels at Highgate School in London in 1955 and A-levels in physics, pure maths, and applied maths at St. George's College, Weybridge.

During his early years, Sinclair earned money mowing lawns and washing up, and earned 6d (old pence) more than permanent staff in a café. Later he went for holiday jobs at electronic companies. At Solartron he inquired about the possibility of electrically propelled personal vehicles. Sinclair applied for a holiday job at Mullard and took one of his circuit designs; he was rejected for precociousness. While still at school he wrote his first article for Practical Wireless.

Sinclair did not want to go to university when he left school at the age of 18 and instead he sold miniature electronic kits by mail order to the hobby market.

Sinclair's Micro Kit was formalised in an exercise book dated 19 June 1958 three weeks before his A-levels. Sinclair drew a radio circuit, Model Mark I, with a components list: cost per set 9/11 (49½p), plus coloured wire and solder, nuts and bolts, plus celluloid chassis (drilled) for nine shillings (45p). Also in the book are advertisement rates for Radio Constructor (9d (3¾p)/word, minimum 6/- (30p)) and Practical Wireless (5/6 (27½p) per line or part line).

Sinclair estimated producing 1,000 a month, placing orders with suppliers for 10,000 of each component to be delivered.

Sinclair wrote a book for Bernard's Publishing, Practical transistor receivers Book 1, which appeared in January 1959. It was re-printed late that year and nine times subsequently. His practical stereo handbook was published in June 1959 and reprinted seven times over 14 years. The last book Sinclair wrote as an employee of Bernard's was Modern Transistor Circuits for Beginners, published in May 1962. At Bernard Babani he produced 13 constructors' books.

Sinclair made two attempts to raise startup capital to advertise his inventions and buy components. He designed PCB kits and licensed some technology. Then he took his design for a miniature transistor pocket radio and sought a backer for its production in kit form. Eventually he found someone who agreed to buy 55% of his company for £3,000 but the deal did not go through.

Sinclair, unable to find capital, joined United Trade Press (UTP) as technical editor of Instrument Practice. Sinclair appeared in the publication as an assistant editor in March 1962. Sinclair described making silicon planar transistors, their properties and applications and hoped they might be available by the end of 1962. Sinclair's obsession with miniaturisation became more obvious as his career progressed. Sinclair undertook a survey for Instrument Practice of semiconductor devices, which appeared in four sections between September 1962 and January 1963.

His last appearance as assistant editor was in April 1969. Through UTP, Sinclair had access to thousands of devices from 36 manufacturers. He contacted Semiconductors Ltd (who at that time sold semiconductors made by Plessey) and ordered rejects to repair. He produced a design for a miniature radio powered by a couple of hearing aid cells and made a deal with Semiconductors to buy its micro-alloy transistors at 6d (2½p) each in boxes of 10,000. He then carried out his own quality control tests, and marketed his renamed MAT 100 and 120 at 7s 9d (38¾p) and 101 and 121 at 8s 6d (42½p).

In June 1978 Science of Cambridge launched a microcomputer kit, the MK14, based on the National SC/MP chip. By July 1978, a personal computer project was under way. When Sinclair learned the NewBrain could not be sold at below £100 as he envisaged, he turned to a simpler computer. In May 1979 Jim Westwood started the ZX80 project at Science of Cambridge; it was launched in February 1980 at £79.95 in kit form and £99.95 ready-built. In November, Science of Cambridge was renamed Sinclair Computers Ltd. 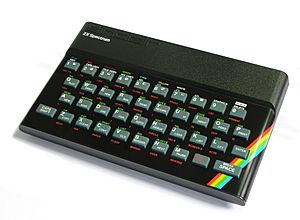 In March 1981, Sinclair Computers was renamed again as Sinclair Research Ltd and the Sinclair ZX81 was launched at £49.95 in kit form and £69.95 ready-built, by mail order. In February 1982 Timex obtained a licence to manufacture and market Sinclair's computers in the United States under the name Timex Sinclair. In April the ZX Spectrum was launched at £125 for the 16 kB RAM version and £175 for the 48 kB version. In March 1982 the company made an £8.55 million profit on turnover of £27.17 million, including £383,000 government grants for the TV80 flat-screen portable television.

In 1982 Sinclair converted the Barker & Wadsworth mineral water bottling factory into the company's headquarters. (This was sold to Cambridgeshire County Council in December 1985 owing to Sinclair's financial troubles.) The following year, he received a knighthood and formed Sinclair Vehicles Ltd. to develop electric vehicles, which resulted in the unsuccessful Sinclair C5 in 1985.

In 1984, Sinclair launched the Sinclair QL computer, intended for professional users. Development of the ZX Spectrum continued with the enhanced ZX Spectrum 128 in 1985.

By 2003, Sinclair Research was collaborating with Hong Kong-based firm Daka. A laboratory was set up for Daka near Croydon to develop products on a royalty basis. The two firms collaborated on a Sea Scooter and a wheelchair drive.

Sinclair is a poker player and appeared in the first three series of the Late Night Poker on Channel 4. He won the first series final of the Celebrity Poker Club spin-off. Sinclair is an atheist. He is a member of British Mensa and was chairman for 17 years from 1980 to 1997. In 1983 Sinclair was awarded with Honorary Degrees of Doctor of Science by the University of Bath, Heriot-Watt University and University of Warwick. He was knighted in the Queen's 1983 Birthday Honours List. In 1984 he was honoured by Imperial College London by becoming a fellow.

Despite his involvement in computing, Sinclair does not use the Internet, stating that he does not like to have "technical or mechanical things around me" as it distracts from the process of invention. In 2010 he stated that he does not use computers himself, and prefers using the telephone rather than email.

Sinclair has stated that it is unavoidable that artificial general intelligence will someday lead to human extinction: "Once you start to make machines that are rivalling and surpassing humans with intelligence, it's going to be very difficult for us to survive. It's just an inevitability."

All content from Kiddle encyclopedia articles (including the article images and facts) can be freely used under Attribution-ShareAlike license, unless stated otherwise. Cite this article:
Clive Sinclair Facts for Kids. Kiddle Encyclopedia.