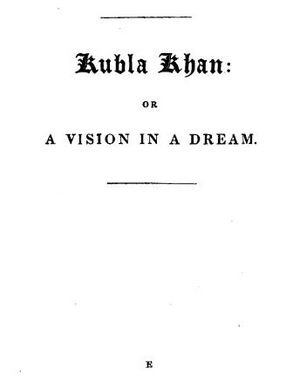 Kubla Khan; or, A Vision in a Dream: A Fragment is a poem written by Samuel Taylor Coleridge, completed in 1797 and published in 1816.

According to Coleridge, Kubla Khan the poem was composed one night after he experienced a dream after reading a work describing Xanadu, the summer palace of the Mongol ruler and Emperor of China Kublai Khan. Upon waking, he set about writing lines of poetry that came to him from the dream, but was interrupted.

The poem could not be completed according to its original 200–300 line plan as the interruption caused him to forget the lines. He left it unpublished and kept it for private readings for his friends until 1816 when, at the prompting of Lord Byron, it was published.

The poem begins with a fanciful description of Kublai Khan's capital Xanadu, which Coleridge places near the river Alph, which passes through caverns before reaching a dark or dead sea.

The poem is considered one of the most famous examples of Romanticism in English poetry. A copy of the manuscript is a permanent exhibit at the British Library in London.

All content from Kiddle encyclopedia articles (including the article images and facts) can be freely used under Attribution-ShareAlike license, unless stated otherwise. Cite this article:
Kubla Khan Facts for Kids. Kiddle Encyclopedia.