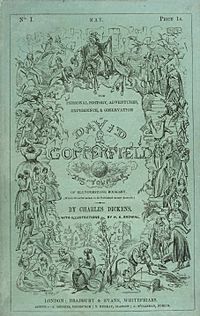 David Copperfield is a novel by Charles Dickens. Like his other novels, it first came out as a series in a magazine under the title The Personal History, Adventures, Experience and Observation of David Copperfield the Younger of Blunderstone Rookery (which he never meant to publish on any account)

The story is told in the first person. Some of the greatest Dickens characters appear in the novel, such as the evil clerk Uriah Heep. Other villains in David's life are his brutal stepfather, Edward Murdstone, and Mr. Creakle, the headmaster of the boarding school that Murdstone sends him to.

The evil characters are balanced by the good characters, such as Peggotty – the faithful servant of the Copperfield family and a lifelong companion to David. Others include David's aunt Betsy Trotwood and her friend Mr. Dick. Agnes Wickfield is a close friend of David since childhood, and later becomes David's second wife and mother of their children. Mr. Micawber is a gentle and friendly who goes to debtors' prison, but in the end makes a success as a sheep farmer in Australia. He is based on Dickens's own father.

All content from Kiddle encyclopedia articles (including the article images and facts) can be freely used under Attribution-ShareAlike license, unless stated otherwise. Cite this article:
David Copperfield (novel) Facts for Kids. Kiddle Encyclopedia.