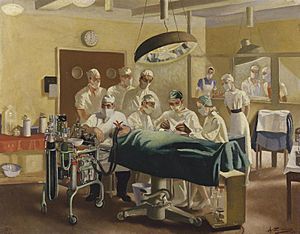 Founded as East Grinstead Cottage Hospital in 1863, the hospital adopted the name, "Queen Victoria Hospital", in the 1930s and moved to its present site in 1936.

During the Second World War, it developed as a specialist burns unit under the leadership of Sir Archibald McIndoe, and became world-famous for pioneering treatment of RAF and allied aircrew who were badly burned or crushed and required reconstructive plastic surgery. It was where the Guinea Pig Club was formed in 1941, as a social club and support network for the aircrew and their family members. The club continued to provide assistance for Guinea Pigs for many years after the war, and met regularly in East Grinstead until 2007. The Queen Victoria Hospital remains at the forefront of specialist care today, and is renowned for its burns treatment facilities and expertise throughout England.

In recent years a major programme of site developments has been underway to replace the ageing estate. In 2012, a new outpatients department opened, along with refurbished burns and paediatric units. Six new operating theatres were opened by the Princess Royal in October 2013.

The hospital is the regional centre of excellence for burns and for reconstructive surgery – the use of specialist techniques such as tissue transplant and microvascular surgery in the restoration of people who have suffered disfigurement or destructive damage from disease, trauma, major surgery, or congenitally. Specialist units that carry out these services include:

In July 2012, the hospital produced a short film about its services: the Queen Victoria Hospital Short Film 2012.

As the regional specialist centre for reconstructive surgery following trauma, Queen Victoria Hospital (QVH) has a well-established telemedicine referral system. In 2008 the service won the regional Innovation and Communications Technology Award and the QVH telemedicine system was also chosen to form part of the Institute of Engineering & Technology's 2008 Faraday Lecture on the overall theme of engineering in health and has been included in a documentary.

In the national cancer patient survey for 2011/12, the hospital achieved the highest score for care quality out of all 160 hospital trusts providing cancer services. Ninety-four per cent of cancer patients surveyed rated the care they received at QVH as 'excellent' or 'very good'.

In the national NHS inpatient survey for 2011, the hospital achieved the highest scores in the country for 27 of the 61 questions asked, including 'Overall, how would you rate the care you received?'.

In the 2011 national NHS staff survey, 94% of doctors and nurses said they would recommend their hospital to friends and family, more than at any other hospital in the country.

In 2011, it was found to be the most recommended NHS hospital in the country by the independent Dr Foster Hospital Guide.

It was named by the Health Service Journal as one of the top hundred NHS trusts to work for in 2015. At that time it had 817 full-time equivalent staff and a sickness absence rate of 3.58%. 91% of staff recommend it as a place for treatment and 74% recommended it as a place to work.

Local bus services are provided by Metrobus. The following routes pass the hospital:

All content from Kiddle encyclopedia articles (including the article images and facts) can be freely used under Attribution-ShareAlike license, unless stated otherwise. Cite this article:
Queen Victoria Hospital Facts for Kids. Kiddle Encyclopedia.