Edenbridge is a town and civil parish in the Sevenoaks district of Kent, England. Its name derives from Old English Eadhelmsbrigge (meaning "Eadhelm's Bridge"). It is located on the Kent /Surrey border on the upper floodplain of the River Medway and gives its name to the latter's tributary, the River Eden. The town has a population of around 7,808.

The old part of the town grew along a section of the otherwise disused Roman road, the London to Lewes Way at the point where it crossed the river. Iron slag from iron smelting in the surrounding area was used in building the road. In the Middle Ages, it became a centre of the Wealden iron industry. There are many mediaeval timber buildings in the town, one of which houses the Eden Valley Museum.

With the coming of the railways the town expanded and the community of Marlpit Hill, north of the original settlement, is now part of the town.

Due to its position on the River Eden floodplain, the centre of the town is prone to severe flooding. The worst flood occurred in 1958 before any flood defences were built and led to enormous damage to Edenbridge High Street. In 1968 ten years later, despite the Eden being dredged to prevent the same occurrence, the town was once again flooded after heavy storms. Though there were no fatalities, a helicopter was needed to save a man from his flooded home. Local legend has it that he hadn't noticed the flood waters rising having been too engrossed in 'The Forsyte Saga' on television. Since then, more adequate flood defences have been built with the local community well prepared to deal with possible flooding.

Edenbridge has had four mills over the centuries, Haxted Mill and Honour's Mill on the River Eden, Christmas Mill on a tributary of the Eden, and a windmill to the south of the town. All four mill buildings survive, but now converted to other uses.

Edenbridge is twinned with Mont-Saint-Aignan in France. The bypass that was built in the early 2000s to relieve traffic pressure on the old, narrow High Street is named Mont St Aignan Way. There are two banks in the town, a post office next to the church and a number of major retail chains.

Despite being a relatively small town, Edenbridge boasts its own hospital - The Edenbridge War Memorial Hospital. Initially a cottage hospital built to care for soldiers returning from The First World War, a purpose built building was established to the south of the town in 1931. With an Out Patients Department, Physiotherapy facilities and a Minor Injuries Unit the hospital is a major part of the fabric of the town. In recent years the hospital has been faced with closure many times, on each occasion it has been saved by local campaigners and townspeople, who see the hospital as an essential part of the community.

Parish and places of worship 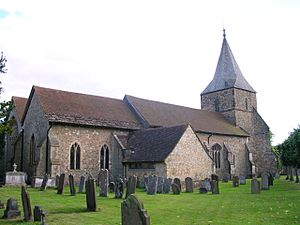 The 13th-century Anglican parish church is dedicated to St Peter and St Paul. The Grade II*-listed building has a set of windows by Sir Edward Burne-Jones in the east wall. The Eden Church, a Baptist chapel on the High Street, was registered for marriages in 1860. The church contains examples of medieval graffiti including ritual protection marks such as the VV symbol.

Also in the parish is the hamlet of Marsh Green. Two places of worship are located here: St John's United Reformed Church and a Kingdom Hall which serves the Oxted Congregation of Jehovah's Witnesses. It was registered for marriages in 1999.

The Grade II-listed former Ebenezer Chapel, used by Independent Calvinists and later by Strict Baptists, stands on Edenbridge High Street. It is now a café and community centre. In the Marlpit Hill area of the town, St Paulinus' Church Centre was used for worship and as a village hall, but has an uncertain future. Nearby, Marlpit Hill Baptist Church (built in the late 19th century) closed and has been demolished.

All content from Kiddle encyclopedia articles (including the article images and facts) can be freely used under Attribution-ShareAlike license, unless stated otherwise. Cite this article:
Edenbridge, Kent Facts for Kids. Kiddle Encyclopedia.