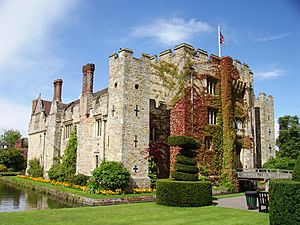 Hever Castle is in Sevenoaks district

Sevenoaks is a local government district in west Kent, England. Its council is based in the town of Sevenoaks.

The area is approximately evenly divided between buildings and infrastructure on the one hand and woodland or agricultural fields on the other. It contains the upper valley of the River Darenth and some headwaters of the River Eden.

The vast majority of the district is covered by the Metropolitan Green Belt.

In terms of districts, it borders Dartford to the north, Gravesham to the northeast, Tonbridge and Malling to the east, briefly Tunbridge Wells to the southeast. It also borders two which, equal to it, do not have borough status, the Wealden district of East Sussex to the south and the Tandridge district of Surrey to the southwest. It borders the London Boroughs of Bromley and Bexley to the northwest.

All content from Kiddle encyclopedia articles (including the article images and facts) can be freely used under Attribution-ShareAlike license, unless stated otherwise. Cite this article:
Sevenoaks District Facts for Kids. Kiddle Encyclopedia.