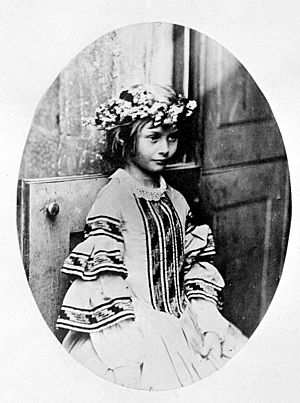 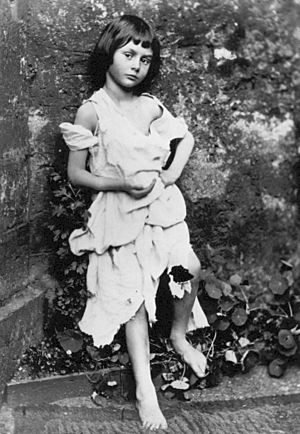 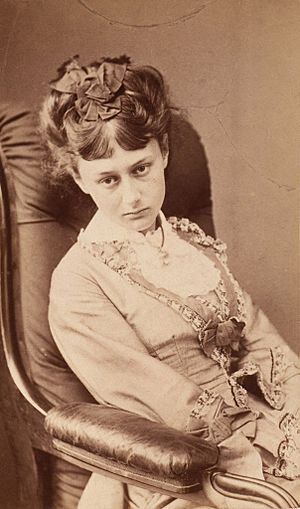 Alice Liddell in 1870, also by Dodson

Alice Pleasance Liddell (4 May 1852 – 16 November 1934) was a child friend of Charles Lutwidge Dodgson. She inspired his two books Alice's Adventures in Wonderland (1865) and Through the Looking-Glass (1871). Dodgson wrote the two books using the pen name, Lewis Carroll.

Alice was born in Westminster, London, one of ten children of Henry Liddell and his wife Lorina. Her father was Dean of Christ Church college in Oxford. Dodgson was a mathematics don, a Fellow at the college. He was 24 years old when he met Alice on 25 April 1856. He was an expert photographer, and took a number of photographs of her.

Alice and her sisters Edith and Lorina took little trips with Dodgson. They had boating parties and other outdoor adventures. Dodgson told stories on these trips. He started the story of Alice in Wonderland during a boat trip on the Thames on 4 July 1862. In 1864, his trips with the girls were brought to an end by their mother. It is not known why.

Alice grew up a refined young woman. She married Reginald Hargreaves in Westminster Abbey in 1880. The couple lived in a country house in Hampshire. Alice was a very capable person. She managed many servants. She arranged balls and parties. She had three sons. Two were killed in World War I. Her husband never overcame this loss. He died in 1926.

Mrs. Hargreaves sold some of her Alice memorabilia through Sotheby's. This sale included the original Alice manuscript. It had been the gift of Dodgson. It was bought by an American. It was returned to the United Kingdom during World War II. It now is in the British Museum. Alice died in 1934 in Westerham, Kent. She was cremated and buried in the Hargreaves family plot in Hampshire.

All content from Kiddle encyclopedia articles (including the article images and facts) can be freely used under Attribution-ShareAlike license, unless stated otherwise. Cite this article:
Alice Liddell Facts for Kids. Kiddle Encyclopedia.