Duke of Westminster facts for kids 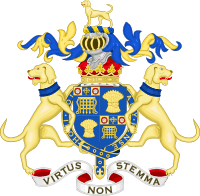 The title of Duke of Westminster was created by Queen Victoria in 1874. It was given to Hugh Grosvenor, 3rd Marquess of Westminster. The current holder of the title is Gerald Grosvenor, 6th Duke of Westminster. Earl Grosvenor, the only son of the Duke, is godfather to Prince George of Cambridge. The Present Duke is entitled to the style of address of His Grace and the family surname is Grosvenor. The Duke of Westminster's seat is at Eaton Hall, Cheshire. The traditional burial place of the Dukes is St Mary's Church, Eccleston. The title was raised from the rank of Marquess. The family also owned a large townhouse in London called simply "Grosvenor House".

The Grosvenor hotel – the venue for some of London's grandest award ceremonies – was sold to Indian conglomerate Sahara for £470m in December 2010. The head of the conglomerate is Sahara India Pariwar.

All content from Kiddle encyclopedia articles (including the article images and facts) can be freely used under Attribution-ShareAlike license, unless stated otherwise. Cite this article:
Duke of Westminster Facts for Kids. Kiddle Encyclopedia.