St Mary's Church is in the village of Eccleston, Cheshire, England, on the estate of the Duke of Westminster south of Chester. The church is recorded in the National Heritage List for England as a designated Grade I listed building. It is an active Anglican parish church in the diocese of Chester, the archdeaconry of Chester and the deanery of Chester. Its benefice is combined with that of St Mary, Pulford. The Dukes of Westminster are buried in the adjacent Old Churchyard.

The present building is the third parish church to have been built in Eccleston. It stands some 100 metres (330 ft) southwest of the site occupied by its predecessors, which stood in what is known today as the Old Churchyard. A church was certainly in existence in Eccleston in 1188, and in the late 18th century a print was made of a dilapidated medieval church which dates back to the 14th century. The medieval church was entirely replaced in 1809 by one of similar size, built on the site by William Porden for the Earls Grosvenor. A chancel was added in 1853, but by the end of the 19th century the 1st Duke of Westminster decided to replace Porden's church with an entirely new structure. After the new church had been completed, Porden's church was demolished, although the south wall of its nave was retained as a "picturesque feature" and remains in the Old Churchyard.

The church is built in red ashlar sandstone. Its plan consists of a west tower, a continuous six-bay nave, a chancel with a clerestory, north and south aisles, and north and south porches. A long vestry block projects to the north. The tower has long bell-openings, irregular buttresses and an embattled top. Canopied niches above the south door contain statues. The church is considered to be an example of Bodley's mature style anticipating features of Liverpool Cathedral.

St Mary's has a nave with north and south aisles and a South porch. Under the tower in the West is the baptistery with a font.

The east end of the north aisle houses the organ loft and the vestry. There is also a large brass plaque listing those members of the Grosvenor family who were buried in the vault once part of Porden's old church. Their resting place in the northeast part of the Old Churchyard is now marked with a simple memorial and surrounded by a low wall with crosses in the corners.

The east end of the south aisle, next to the church's chancel, is occupied by the Grosvenor Chapel. Above its altar are the carved figures of Jesus, Saint Augustine and Saint Paulinus.

Separating the Grosvenor Chapel from the church's chancel is a monument to the memory of the 1st Duke of Westminster dated 1901, which consists of a tomb-chest and canopy designed by Bodley with an effigy by Farmer and Brindley, sculpted by Léon-Joseph Chavalliaud. Opposite, on the Grosvenor Chapel's south wall, is a bronze bust to the 2nd Duke as well as a memorials to Captain Lord Hugh William Grosvenor, who was killed in the First World War, the 3rd, 4th and 5th Dukes of Westminster. The Grosvenor Chapel has two accesses: a door to the churchyard and a grille leading into the south aisle.

In the tower there is a ring of eight bells which were cast by John Taylor & Co in 1899.

Under the tower is the baptistry with a font. The font is made from Thessaly marble, and has a lifting oak cover decorated with the carvings of eight saints.

In the baptistry is part of a memorial to the Grosvenor family dated 1624 that has been moved from the old church.

The authors of the Buildings of England series were impressed by the furnishings of the church, in particular the reredoses by Farmer and Brindley, the chancel screens, the organ case and the bench ends. All the stained glass is by Burlison and Grylls. 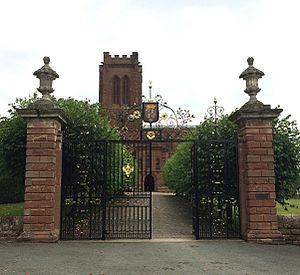 The 'new' churchyard at St Mary's

St Mary's Church is accessed from Church Road through a set of wrought-iron gates bearing the Duke of Westminster's coat of arms. These gates date from the early 18th century and were originally at Emral Hall, Flintshire. They were made by the Davies Bros. An avenue of lime trees leads from these gates to the south entrance of the church. Most of the enclosure around St Mary's Church is covered by lawns, although the section immediately east of the church and north of the Rectory is used as parish cemetery. 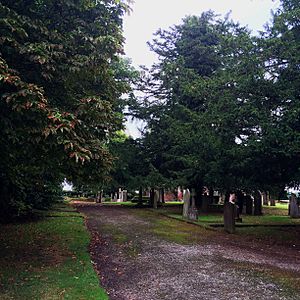 View of the Old Churchyard 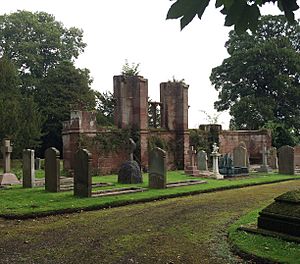 Remaining wall of Eccleston's old parish church and graves of the Grosvenor family, Dukes of Westminster 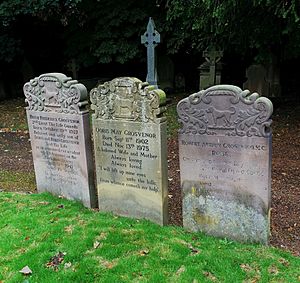 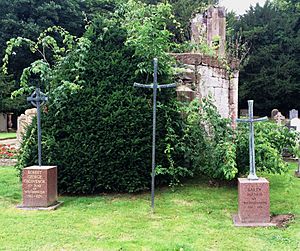 Eccleston's old parish church with the graves of the 5th Duke, the 4th Duke and the latter's wife Sally

With its many tall trees, the Old Churchyard has features of a woodland. In its centre are the remains of Porden's old parish church, which consist of a sandstone wall with the lower parts of two windows measuring about 60 feet (18 m) long by 18 feet (5 m) high. It is designated as a Grade II listed building.

Along the south side of the remaining wall of Porden's old church are the graves of the Dukes of Westminster, other members of the Grosvenor family and their relatives. A square enclosure in the northeast part of the Old Churchyard, now covered with gravel and surrounded by a low wall with crosses in the corners, marks the spot where the Grosvenor family vault was located within Porden's church. The names of those ancestors of the Dukes of Westminster who are interred here are recorded on a brass plaque inside the present church building. The grave of Edward George Hugh, Earl Grosvenor (1904–1909), by Detmar Blow and Fernand Billerey, sculpted by Emile Madeline, is a Grade II listed building.

The churchyard contains ten CWGC registered war graves. Of these, seven are from World War I and three from World War II. There is also the grave of a Victoria Cross recipient, Alfred Ernest Ind. 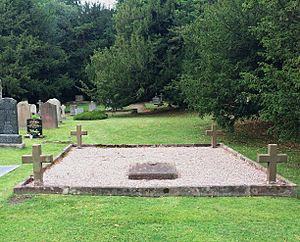 The enclosure which marks the site of the old Grosvenor family vault within the old parish church.

Many ancestors of the Dukes of Westminster, including:

A stone tablet in the enclosure (see here) bears the arms of the Grosvenor baronets with the dates 1599 and 1894 and the inscription: "This stone marks the resting place of those members of the Grosvenor family who were buried in a vault under the old church which was demolished in 1900 and who were reinterred in this plot and their names are recorded on the memorial tablet in Eccleston church." As the inscription indicates, the names of those family members buried here are listed on a large brass wall plaque in the north aisle of the church (see here).

Elsewhere in the Old Churchyard

All content from Kiddle encyclopedia articles (including the article images and facts) can be freely used under Attribution-ShareAlike license, unless stated otherwise. Cite this article:
St Mary's Church, Eccleston Facts for Kids. Kiddle Encyclopedia.