Elia Kazan ( born Elias Kazantzoglou; September 7, 1909 – September 28, 2003) was a Greek-American director, producer, writer and actor, described by The New York Times as "one of the most honored and influential directors in Broadway and Hollywood history".

He was born in Constantinople (now Istanbul, Turkey), to Cappadocian Greek parents. After attending Williams College and then the Yale School of Drama, he acted professionally for eight years, later joining the Group Theatre in 1932, and co-founded the Actors Studio in 1947. With Robert Lewis and Cheryl Crawford, his actors' studio introduced "Method Acting" under the direction of Lee Strasberg. Kazan acted in a few films, including City for Conquest (1940).

Noted for drawing out the best dramatic performances from his actors, he directed 21 actors to Oscar nominations, resulting in nine wins. He directed a string of successful films, including A Streetcar Named Desire (1951), On the Waterfront (1954), and East of Eden (1955). During his career, he won two Oscars as Best Director, three Tony Awards, and four Golden Globes. He also received an Honorary Oscar.

His films were concerned with personal or social issues of special concern to him.

His first such "issue" film was Gentleman's Agreement (1947), with Gregory Peck, which dealt with anti-Semitism in America. It received 8 Oscar nominations and 3 wins, including Kazan's first for Best Director. It was followed by Pinky, one of the first films in mainstream Hollywood to address racial prejudice against black people. In 1954, he directed On the Waterfront, a film about union corruption on the New York harbor waterfront. A Streetcar Named Desire (1951), an adaptation of the stage play which he had also directed, received 12 Oscar nominations, winning 4, and was Marlon Brando's breakthrough role. In 1955, he directed John Steinbeck's East of Eden, which introduced James Dean to movie audiences.

A turning point in Kazan's career came with his testimony as a witness before the House Committee on Un-American Activities in 1952 at the time of the Hollywood blacklist, which brought him strong negative reactions from many liberal friends and colleagues.

Kazan influenced the films of the 1950s and 1960s with his provocative, issue-driven subjects.

In 2010, Martin Scorsese co-directed the documentary film A Letter to Elia as a personal tribute to Kazan. 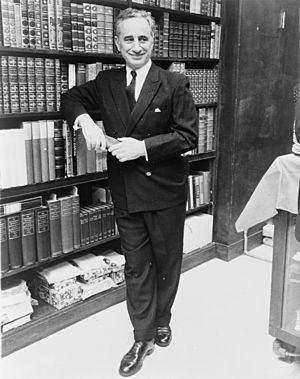 Elia Kazan was married three times. His first wife was playwright Molly Day Thacher. They were married from 1932 until her death in 1963; this marriage produced two daughters and two sons, including screenwriter Nicholas Kazan.

His second marriage, to the actress Barbara Loden, lasted from 1967 until her death in 1980, and produced one son. His marriage, in 1982, to Frances Rudge continued until his death.

Kazan became known as an "actor's director" because he was able to elicit some of the best performances in the careers of many of his stars. Under his direction, his actors received 21 Academy Award nominations and won nine Oscars. He won as Best Director for Gentleman's Agreement (1947) and for On the Waterfront (1954). Both A Streetcar Named Desire (1951) and On the Waterfront were nominated for twelve Academy Awards, respectively winning four and eight.

Kazan never lost his identification with the oppressed people he remembered from the depths of the Great Depression. With his many years with the Group Theatre and Actors Studio in New York City and later triumphs on Broadway, he became famous "for the power and intensity of his actors' performances." He was the pivotal figure in launching the film careers of Marlon Brando, James Dean, Julie Harris, Eli Wallach, Eva Marie Saint, Warren Beatty, Lee Remick, Karl Malden, and many others. Seven of Kazan's films won a total of 20 Academy Awards. Dustin Hoffman commented that he "doubted whether he, Robert De Niro, or Al Pacino, would have become actors without Mr. Kazan's influence."

Upon his death, at the age of 94, the New York Times described him as "one of the most honored and influential directors in Broadway and Hollywood history." The Death of a Salesman and A Streetcar Named Desire, two plays he directed, are considered to be some of the greatest of the 20th century. Although he became a respected director on Broadway, he made an equally impressive transition into one of the major film directors of his time.

During his career, Kazan won both Tony and Oscar Awards for directing on stage and screen. In 1982, President Ronald Reagan presented him with the Kennedy Center honors award, a national tribute for lifetime achievement in the arts. At the ceremony, screenwriter Budd Schulberg, who wrote On the Waterfront, thanked his lifelong friend saying, "Elia Kazan has touched us all with his capacity to honor not only the heroic man, but the hero in every man."

Martin Scorsese has directed a film documentary, A Letter to Elia (2010), considered to be an "intensely personal and deeply moving tribute" to Kazan. Scorsese was "captivated" by Kazan's films as a young man, and the documentary mirrors his own life story while he also credits Kazan as the inspiration for his becoming a filmmaker. It won a Peabody Award in 2010.

In addition to these awards, Kazan has a star on the Hollywood Walk of Fame, which is located on 6800 Hollywood Boulevard. He is also a member of the American Theater Hall of Fame.

All content from Kiddle encyclopedia articles (including the article images and facts) can be freely used under Attribution-ShareAlike license, unless stated otherwise. Cite this article:
Elia Kazan Facts for Kids. Kiddle Encyclopedia.