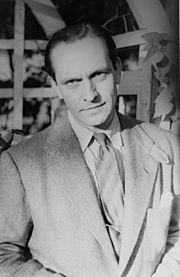 Fredric March (born Ernest Frederick McIntyre Bickel; August 31, 1897 – April 14, 1975) was an American stage, movie, radio, and television actor. He was known for his Academy Award-winning role as Dr. Henry Jekyll / Mr. Edward Hyde in Dr. Jekyll and Mr. Hyde. He won another Academy Award for his role as Al Stephenson in The Best Years of Our Lives. He also won a Tony Award, a Golden Globe Award, and a BAFTA Award.

March was born on August 31, 1897 in Racine, Wisconsin. March was married to Ellis Baker from 1921 until they divorced in 1927. March was then married to Florence Eldridge from 1927 until his death in 1975. With Eldridge he has two adopted children. March died on April 14, 1975 in Los Angeles, California from prostate cancer, aged 77.

All content from Kiddle encyclopedia articles (including the article images and facts) can be freely used under Attribution-ShareAlike license, unless stated otherwise. Cite this article:
Fredric March Facts for Kids. Kiddle Encyclopedia.