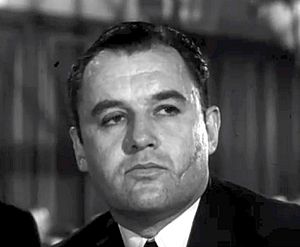 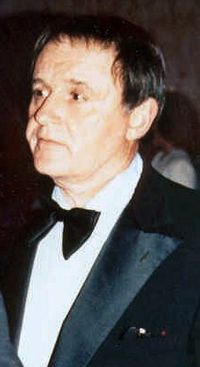 Rodney Stephen "Rod" Steiger (April 14, 1925 – July 9, 2002) was an American movie, television, stage, radio, and voice actor. He was known for his roles in: In the Heat of the Night, On the Waterfront, The Pawnbroker, Doctor Zhivago, Oklahoma!, A Fistful of Dynamite, and in Mars Attacks!. He won two BAFTA Awards, one Golden Globe Award, and an Academy Award.

Steiger was born on April 14, 1925 in Westhampton, New York. He studied at the Actor's Studio.

Steiger died on July 9, 2002 in Los Angeles, California from pneumonia after having bladder surgery, aged 77. He was later buried at the Forest Lawn Memorial Park Cemetery in Hollywood Hills, California.

All content from Kiddle encyclopedia articles (including the article images and facts) can be freely used under Attribution-ShareAlike license, unless stated otherwise. Cite this article:
Rod Steiger Facts for Kids. Kiddle Encyclopedia.