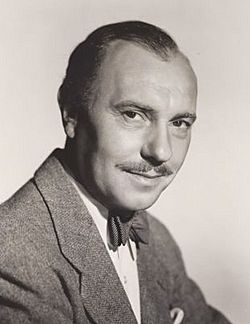 Sir Ralph David Richardson (19 December 1902 – 10 October 1983) was an English actor who, with John Gielgud and Laurence Olivier, was one of the trinity of male actors who dominated the British stage for much of the 20th century. He worked in films throughout most of his career, and played more than sixty cinema roles. From an artistic but not theatrical background, Richardson had no thought of a stage career until a production of Hamlet in Brighton inspired him to become an actor. He learned his craft in the 1920s with a touring company and later the Birmingham Repertory Theatre. In 1931 he joined the Old Vic, playing mostly Shakespearean roles. He led the company the following season, succeeding Gielgud, who had taught him much about stage technique. After he left the company, a series of leading roles took him to stardom in the West End and on Broadway.

In the 1940s, together with Olivier and John Burrell, Richardson was the co-director of the Old Vic company. There, his most celebrated roles included Peer Gynt and Falstaff. He and Olivier led the company to Europe and Broadway in 1945 and 1946, before their success provoked resentment among the governing board of the Old Vic, leading to their dismissal from the company in 1947. In the 1950s, in the West End and occasionally on tour, Richardson played in modern and classic works including The Heiress, Home at Seven, and Three Sisters. He continued on stage and in films until shortly before his sudden death at the age of eighty. He was celebrated in later years for his work with Peter Hall's National Theatre and his frequent stage partnership with Gielgud. He was not known for his portrayal of the great tragic roles in the classics, preferring character parts in old and new plays.

Richardson's film career began as an extra in 1931. He was soon cast in leading roles in British and American films including Things to Come (1936), The Fallen Idol (1948), Long Day's Journey into Night (1962) and Doctor Zhivago (1965). He received nominations and awards in the UK, Europe and the US for his stage and screen work from 1948 until his death. Richardson was twice nominated for the Academy Award for Best Supporting Actor, first for The Heiress (1949) and again (posthumously) for his final film, Greystoke: The Legend of Tarzan, Lord of the Apes (1984).

Throughout his career, and increasingly in later years, Richardson was known for his eccentric behaviour on and off stage. He was often seen as detached from conventional ways of looking at the world, and his acting was regularly described as poetic or magical.

All content from Kiddle encyclopedia articles (including the article images and facts) can be freely used under Attribution-ShareAlike license, unless stated otherwise. Cite this article:
Ralph Richardson Facts for Kids. Kiddle Encyclopedia.