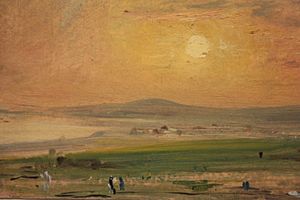 Shoreham Bay, May 1828, by John Constable

Shoreham-by-Sea (often shortened to Shoreham) is a seaside town and port in West Sussex, England.

The town has a population of 48,487 according to the 2011 census, and is historically part of Sussex.

The town is bordered to its north by the South Downs, to its west by the Adur Valley and to its south by the River Adur and Shoreham Beach on the English Channel. The town lies in the middle of the ribbon of urban development along the English south coast between the city of Brighton and Hove and the town of Worthing. Shoreham civil parish covers an area of 984.88 hectares (2,433.7 acres) and has a population of 19,175 (2001 census).

Old Shoreham dates back to pre-Roman times. St Nicolas' Church, inland by the River Adur, is partly Anglo-Saxon The name of the town has an Old English origin. The town and port of New Shoreham was established by the Norman conquerors towards the end of the 11th century.

St Mary de Haura Church (St Mary of the Haven) was built in the decade following 1103 (the Domesday Book was dated 1086), and around this time the town was laid out on a grid pattern that, in essence, survives in the town centre. The church is only half the size of the original – the former nave was ruinous at the time of the civil war although remnants of the original west façade survive in the churchyard to some height.

The growth of neighbouring Brighton, Hove and Worthing – in particular the arrival of the railway in 1840 – prepared the way for Shoreham's rise as a Victorian sea port, with several shipyards and an active coasting trade. Shoreham Harbour remains in commercial operation to this day.

Southdown Golf Club, Shoreham-by-Sea was founded in 1902, but ceased to operate in the 1940s.

Shoreham Beach, to the south of the town, is a shingle spit deposited over millennia by longshore drift, as an extension to Lancing parish in the west. This blocks the southerly flow of the River Adur which turns east at this point to discharge into the English Channel further along the coast at a point that has varied considerably over time. During the 17th and 18th centuries, the mouth of the river shifted eastwards which restricted trade to the port; by 1810 it was almost opposite Aldrington church. In 1816, work had been completed to fix the position of the river in its present position, flowing into the sea between two piers. Once the harbour mouth was stabilised it was defended by Shoreham Fort which was built in 1857. Converted railway carriages became summer homes around the start of the 20th century, and 'Bungalow Town', as it was then known, became home to the early British film industry. Shoreham Beach officially became part of Shoreham-by-Sea in 1910. Much of the housing in the area was cleared for defence reasons during the Second World War and most of what remained after the war is now long gone, having been replaced by modern houses, some of which are extremely expensive, architect designed constructions. The Church of the Good Shepherd, built in 1913, still stands. Along the Adur mud flats adjacent to Shoreham Beach sits (and at high tides floats) a large collection of houseboats made from converted barges, tugs, mine sweepers, Motor Torpedo Boats etc. The seaside shingle bank of Shoreham beach extends further east past the harbour mouth, forming the southern boundary of the commercial harbour in Southwick, Portslade and Hove. The Monarch's Way long-distance footpath, commemorating the flight of Charles II to France after the Battle of Worcester, follows the beach westwards from Hove past Portslade and Southwick, terminating by the harbour mouth's east breakwater.

Transversed by the River Adur and with the downs and the sea nearby the area supports a diverse wildlife flora and fauna. The pied wagtail is common in the town in the winter months. Insects include dragonflies over the flood plains of the river. The south and west facing downs attract at least 33 species of butterflies including a nationally important population of the chalkhill blue butterfly on Mill Hill. The underlying rock is chalk on the downs, with alluvium in the old river channels. The Adur district has a variety of habitats in a small area, including natural chalk downs and butterfly meadows, freshwater and reed beds, salt marsh and estuary, brackish water lagoons, woodland, shingle seashore, chalk platform undersea and large expanses of sand.

Shoreham Airport lies to the west of the main town and has been in private ownership since 2006. It is the UK's oldest licensed airport still in operation and has a 1936 Grade II*-listed Art Deco terminal building. The terminal has been a filming location for an episode of Agatha Christie's Poirot, "Lord Edgware Dies", a Crimewatch-type reconstruction (2000, ITV Meridian), BBC Tenko series episode, The Da Vinci Code film scenes and the film Woman in Gold.

The town is served by Shoreham-by-Sea railway station, located on the West Coastway Line.

Local bus services are provided by the Brighton & Hove bus company, Stagecoach South and a local town route is operated by Compass Travel.

Shoreham Tollbridge crosses the River Adur in the west of the town. This bridge is a Grade II* listed building and was the last Sussex toll bridge in use. The bridge was part of the A27 road until it was closed to traffic in 1968. The structure is now too weak to carry vehicles and underwent extensive restoration, then was ceremonially re-opened for pedestrians on 23 October 2008, by Prince Andrew, Duke of York. Adur Ferry Bridge in the south of the town (replacing the old Shoreham footbridge) crosses the River Adur to Shoreham Beach. It was opened to the public by HRH The Duke of Gloucester on 13 November 2013.

The town centre hosts monthly farmers' and artisans' markets in East Street on the second and fourth Saturday of the month respectively.

All content from Kiddle encyclopedia articles (including the article images and facts) can be freely used under Attribution-ShareAlike license, unless stated otherwise. Cite this article:
Shoreham-by-Sea Facts for Kids. Kiddle Encyclopedia.