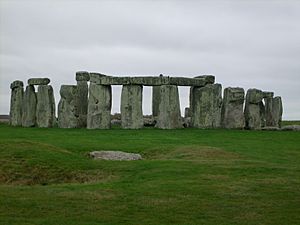 Stonehenge is one of the most famous prehistoric ancient monuments.

The term ancient monument is a term in British law. It is an early historical structure or monument. For example. it may be an archaeological site worth preserving and study. The sites (monuments) are of archaeological or heritage interest.

The term differs from the American term "national monument". The U.S. National Monuments are few in number and may include natural formations. British ancient monuments are by definition manmade.

All content from Kiddle encyclopedia articles (including the article images and facts) can be freely used under Attribution-ShareAlike license, unless stated otherwise. Cite this article:
Ancient monument Facts for Kids. Kiddle Encyclopedia.