Brighton and Hove facts for kids

Brighton and Hove is a city in East Sussex, in South East England. At the 2011 census, it was England's most populous seaside resort with a population of 273,400.

The towns of Brighton and Hove formed a unitary authority in 1997 and in 2001 were granted city status by Queen Elizabeth II. "Brighton" is often referred to synonymously with the official "Brighton and Hove" although many locals still consider the two to be separate towns.

For more details, see History of local government in Sussex 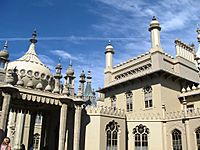 Brighton and Hove is the result of a number of historic local government reorganisations:

On 15 October 2004, Brighton and Hove was granted Fairtrade City status.

Elections are held every four years, with the last elections occurring on 7 May 2015.

Brighton and Hove was the first ever council in the United Kingdom where the Green Party were both the largest group and led the council (from May 2011 to May 2015).

In 2013 the council was obliged to finalise single status across its workforce, resulting in a strike of its refuse collectors and street cleaners. Their council reformed their allowances to equalise them with other staff at the organisation conducting similar work.

The Leader of the Council and Labour minority administration since May 2015 is Councillor Warren Morgan (Lab Co-op).

The mayor of Brighton and Hove for 2016-2017 is Councillor Pete West. Geoff Raw is the current chief executive.

In 2012 it was revealed that the Brighton and Hove unitary authority has been permanently banned from accessing information from the Driver and Vehicle Licensing Agency. This information is normally made available to local authorities for purposes such as enforcing parking fines, but access can be withdrawn if they are found to be misusing the service. The Big Brother Watch organisation, which obtained the information about the ban under a Freedom of Information request, claimed that "the public are right to be worried that their privacy is at risk across a range of government services."

The first census of Brighton was in 1801.

In the 2001 census, Brighton and Hove had the highest percentage of citizens indicating their religion as Jedi among all principal areas of England and Wales.

Wording of the Letters Patent

The Letters Patent of 2001 that confers City status is worded thus:

ELIZABETH the SECOND BY THE GRACE OF GOD OF THE UNITED KINGDOM OF GREAT BRITAIN AND NORTHERN IRELAND & OF OUR REALMS & TERRITORIES QUEEN HEAD OF THE COMMONWEALTH DEFENDER OF THE FAITH.

To all whom these Presents shall come Greeting. Whereas We for divers good causes and considerations Us thereunto moving are graciously pleased to confer on the Towns of Brighton and Hove the status of a city. Now Therefore Know Ye that We of Our especial grace and favour and mere motion do by these Presents ordain declare and direct that the TOWNS OF BRIGHTON AND HOVE shall henceforth have the status of a CITY and shall have all such rank liberties privileges and immunities as are incident to a City. In witness whereof We have caused Our Letters to be made Patent Witness Ourself at Westminster the thirty first day of January in the forty ninth year of our reign.

The economy of the city is service-based with a strong emphasis on creative, digital and electronic technologies. Tourism and entertainment are important sectors for the City, which has many hotels and amusements, as well as Brighton Pier and Shoreham/Portslade Harbour.

All content from Kiddle encyclopedia articles (including the article images and facts) can be freely used under Attribution-ShareAlike license, unless stated otherwise. Cite this article:
Brighton and Hove Facts for Kids. Kiddle Encyclopedia.