J. B. Priestley facts for kids

His Yorkshire background is reflected in much of his fiction, notably in The Good Companions (1929), which first brought him to wide public notice. Many of his plays are structured around a time slip, and he went on to develop a new theory of time, with different dimensions that link past, present, and future.

In 1940, he broadcast a series of short propaganda radio shows that were credited with strengthening civilian morale during the Battle of Britain. His left-wing beliefs brought him into conflict with the government, and influenced the birth of the Welfare State. The programme was eventually cancelled by the BBC for being too critical of the Government.

He was a founding member of the Campaign for Nuclear Disarmament in 1958. He is perhaps best known for his 1945 play An Inspector Calls. 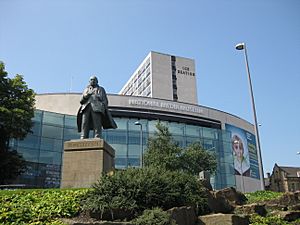 Statue outside the National Media Museum

Priestley began placing his papers at the Harry Ransom Center at the University of Texas at Austin in 1960, with additions being made throughout his lifetime. The Center has continued to add to the collection through gifts and purchases when possible. The collection currently amounts to roughly 23 boxes, and includes original manuscripts for many of his works and an extensive series of correspondence.

Novelizations by Ruth Mitchell (author of the wartime novel The Lost Generation and Priestley's sister-in-law by way of his second marriage):

All content from Kiddle encyclopedia articles (including the article images and facts) can be freely used under Attribution-ShareAlike license, unless stated otherwise. Cite this article:
J. B. Priestley Facts for Kids. Kiddle Encyclopedia.