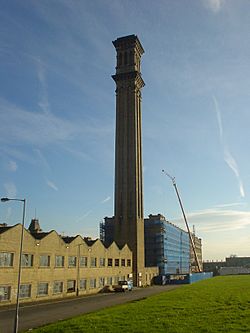 Lister Mills is the most dominant landmark in Manningham

Manningham is an historically industrial-workers area of Bradford, West Yorkshire, England, approximately a mile north of the Bradford city centre. The population of the 2011 Census for the Bradford Ward was 19,983.

Manningham holds a wealth of industrial history, including mill buildings, imposing wool merchants' houses and back-to-back terraced houses. It is the old Jewish area of Bradford. Many of Manningham's German community later migrated to the Heaton area of the city.

Manningham was the location of the Manningham Riot (June 1995) and the Bradford Riots (July 2001). In April 1994, The Independent newspaper reported that unemployment in Manningham stood at 40% (around four times the national average at the time), and that a large number of known drug users and alcoholics lived there.

The area usually termed "Manningham" tends to be that bordered by Manningham Lane to the east, Thornton Road (B6145) to the south west, and Oak Lane to the north. However this is historically inaccurate as places such as White Abbey, Black Abbey, Longlands and Brown Royd that would be covered by this were separate communities. This inaccurate view of what constitutes Manningham has persisted with the creation of administrative units such as the Manningham Ward.

Manningham Lane, part of the A650, stretches from Hamm Strasse to Lister Park (also known as Manningham Park) where it becomes Keighley Road. It is a busy road in terms of both traffic and commerce, lined with shops and businesses for practically its entire length.

White Abbey Road (which becomes Whetley Hill at the junction with Whetley Lane and Carlisle Road), part of the B6144, is similarly active, with several large clothing outlets and jewellery shops.

Oak Lane is similarly commercialised, although with a tendency towards smaller shops and food outlets.

Lumb Lane, running parallel to and between Manningham Lane and White Abbey Road, is the home to many independent shops, mainly catering to the local South Asian community. There are also several pubs and South Asian restaurants. Recent actions by the Bradford Council and local community groups have helped in starting to improve the area.

White Abbey is a historic district on the northwestern edge of Bradford city centre. Its boundaries are roughly the equivalent of White Abbey Road to the west and south, Lumb Lane to the east and Carlisle Road to the north. Like many of the older districts of inner-city Bradford, White Abbey was once a vibrant and highly populated neighbourhood. Today the area is dominated by social housing.

Notable local amenities include the pub, Haigy's, and the "Pakistan and International Link Community Centre."

The most dominant landmark in the entire city is Lister Mills. The mills stand on the most elevated part of Manningham, at the top of Oak Lane (although, more accurately, the mills are on the corner of Lilycroft and Heaton Roads). The mills have recently been converted into luxury modern flats.

Another key landmark is Lister Park. This triangular park, situated between Keighley Road, North Park Road and Emm Lane in the north of Manningham, is one of the city's largest parks. It houses Cartwright Hall (a museum and art gallery), a large boating lake and the Mughal Water Gardens as well as extensive botanical gardens.

Manningham also contains Valley Parade football stadium, which has been the home of Bradford City football club since they were founded in 1903 and where Bradford RLFC played in recent years while Odsal Stadium was redeveloped. In 1985 the Valley Parade ground was the site of a fire which killed 56 spectators and injured at least 265 at the final game of the season, against Lincoln City, and led to improved safety regulations at British sports grounds. As was once common with English football stadiums, the stadium takes its name from the road on which it is situated, Valley Parade being the name of a road that slopes down Bradford's valley off the A650.

All content from Kiddle encyclopedia articles (including the article images and facts) can be freely used under Attribution-ShareAlike license, unless stated otherwise. Cite this article:
Manningham, Bradford Facts for Kids. Kiddle Encyclopedia.