Peter and the Wolf facts for kids 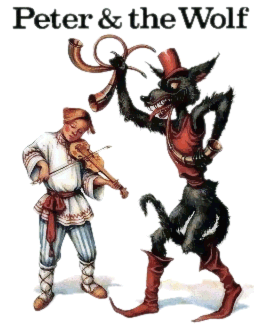 Peter and the Wolf is a composition by Sergei Prokofiev. It was written in 1936 after his return to Russia, then part of the Soviet Union. It is a children's story. Prokofiev got the idea from Natalya Sats, who led the Moscow State Musical Theater for Children. The idea was to introduce children to the different musical instruments in the orchestra. For this reason, each character in the story has a particular instrument and a musical theme:

(The hunters' theme is actually introduced by the woodwinds) In addition, there is a narrator telling the story.

In 1946, Walt Disney produced an animated version of Peter and the Wolf. There are some differences to the original work, for example the animals are given names. It was released on video tape in the 1990s.

All content from Kiddle encyclopedia articles (including the article images and facts) can be freely used under Attribution-ShareAlike license, unless stated otherwise. Cite this article:
Peter and the Wolf Facts for Kids. Kiddle Encyclopedia.