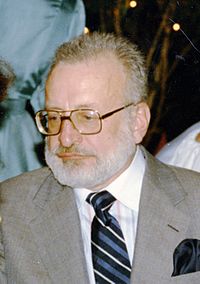 George Campbell Scott (October 18, 1927 – September 22, 1999) was an American stage, television, and movie actor, director and producer. He was best known for his stage work, and also well known as his role of General George S. Patton in the movie Patton, and as General Buck Turgidson in Stanley Kubrick's Dr. Strangelove.

Scott was born in Wise, Virginia on October 18, 1927 to Helena Agnes (née Slemp) and to George Dewey Scott. He was educated at Redford High School and in the University of Missouri.

Scott began his career in 1958 in the movie The Hanging Tree, and since then he has appeared in over 100 movie and more than 50 stage works, in movies he had appeared in; Jane Eyre, The Hospital, A Christmas Carol, Titanic (TV movie 1996), Movie Movie, The Formula, Patton, and in Dr. Strangelove. In a interview Scott said that his influences were James Cagney, Paul Muni, and Bette Davis.

Scott died on September 22, 1999 from an abdominal aortic aneurysm in Westlake Village, California, he was 71 years old. His remains are buried next to actor Walter Matthau in a unmarked grave. 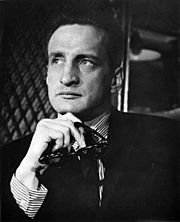 Scott with Geraldine Page in 1959 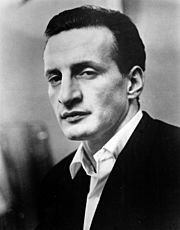 All content from Kiddle encyclopedia articles (including the article images and facts) can be freely used under Attribution-ShareAlike license, unless stated otherwise. Cite this article:
George C. Scott Facts for Kids. Kiddle Encyclopedia.