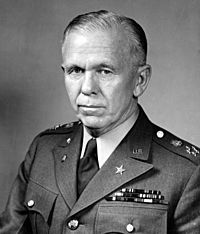 The Foundation is located in Lexington, Virginia, and contains a library, archive, a museum and administrative offices. The Foundation opened in 1964 on the Post of the Virginia Military Institute, Marshall's alma mater.

The Marshall Museum displays exhibits of Marshall's life and work in the entry hall and two adjacent galleries, one focused on his military career and the other on his achievements following World War II. Marshall received the Nobel Peace Prize in 1953 for the Marshall Plan.

As of August 2019, the foundation planned to renovate the museum.

The Marshall Research Library covers United States military & diplomatic history between the years of George Marshall's career as a military officer and public servant, roughly 1900-1960. Along with sorted paper collections, the library contains more than 23,000 manuscripts, two million documents including many from the National Archives and Records Administration, hundreds of era maps, thousands of photographs, 700 posters from all countries involved in both World Wars, films, and over 200 oral histories.

In January 2021 the Marshall Museum closed its doors. A small collection of artifacts will be kept by the Foundation while the rest will be sent for permanent display at other museums.

All content from Kiddle encyclopedia articles (including the article images and facts) can be freely used under Attribution-ShareAlike license, unless stated otherwise. Cite this article:
George C. Marshall Foundation Facts for Kids. Kiddle Encyclopedia.