Wise is a town in Wise County, Virginia, United States. The population was 3,286 at the 2010 census. It is the county seat of Wise County. It was originally incorporated as the town of Gladeville in 1874. The town's name was changed to Wise in 1924, after Henry A. Wise, the last Virginia governor before the American Civil War and the first governor to hail from the Eastern Shore of Virginia.

The town is also the home of the University of Virginia's College at Wise.

Wise is located in the middle of the county of Wise. According to the United States Census Bureau, the town has a total area of 3.1 square miles (8.0 km²), all of it land. 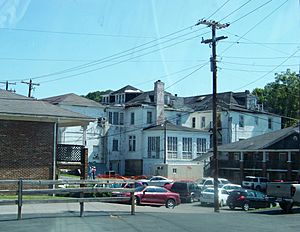 The largest highway in Wise is Orby Cantrell Highway (US 23) a north–south highway that runs through the west end of the town. Wise is also home to the Lonesome Pine Airport (LNP). The airport is located approximately three miles northeast of the central business district.

The Town of Wise has one sister city: 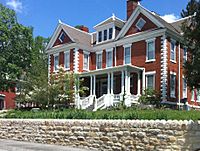 Three buildings on Main Street in the town of Wise are on the National Register of Historic Places. The Colonial Hotel, now known as the Inn at Wise Court House, was added to the Register in 1991. The Wise County Courthouse was added to the Register ten years earlier, in 1981. In February 2006, the Register listed the E. M. Fulton House. The downtown area hosts the Battles at Wise Civil War Living History Presentation and Re-Enactment on the second weekend of July each year.

The climate in this area is characterized by hot, humid summers and generally mild to cool winters. According to the Köppen Climate Classification system, Wise has a humid subtropical climate, abbreviated "Cfa" on climate maps.

All content from Kiddle encyclopedia articles (including the article images and facts) can be freely used under Attribution-ShareAlike license, unless stated otherwise. Cite this article:
Wise, Virginia Facts for Kids. Kiddle Encyclopedia.