Wise County is a county located in the U.S. state of Virginia. As of the 2010 census, the population was 41,452. Its county seat is Wise. The county was formed in 1856 from Lee, Scott, and Russell Counties and named for Henry A. Wise, who was the Governor of Virginia at the time.

The Cherokee conquered the area including Wise from the Xualae between 1671 and 1685. It was later contested by the Six Nations and the Shawnee. A Cherokee hunting party fought a protracted battle with a Shawnee one at the headwaters of the Clinch River for two days in the summer of 1786, a victory for the Cherokee although losses were heavy on both sides.

The first white explorers to have reached present-day Wise county are said to have been Thomas Walker and Christopher Gist, both in 1750. Several forts were built all along the Clinch from 1774 onward, but only after Chickamauga Cherokee leader Bob Benge was slain in 1794 was present-day Wise considered safe for white settlers even to hunt in. Among the earliest settlers within the county was William Wells in around 1792. 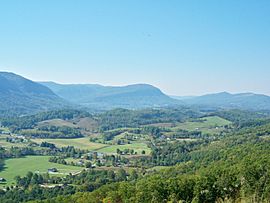 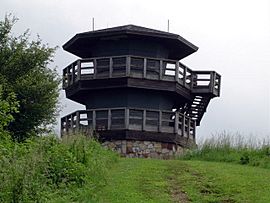 A large portion of the Jefferson National Forest is contained within Wise County, and the Clinch River winds through the county. These two factors, combined with Wise County's location in the Appalachian Mountains, mean that Wise County offers many opportunities for outdoor recreation.

In addition to many trails connecting to and surrounding the Appalachian Trail system, Wise county is home to many parks, including Miners' Park in Big Stone Gap and the Louis E. Henegar Miners' Memorial Park in Appalachia.

Among the unique features of Wise County are High Knob, a mountain which featured one of the last remaining Appalachian Fire Towers until its destruction by arson on October 31, 2007, and Wetlands Estonoa, an Appalachian Wetland and part of the Clinch River Watershed.

Wise County Christian School operates as a private school in the county.

All content from Kiddle encyclopedia articles (including the article images and facts) can be freely used under Attribution-ShareAlike license, unless stated otherwise. Cite this article:
Wise County, Virginia Facts for Kids. Kiddle Encyclopedia.