Letcher County is a dry county, with the only exceptions being the Highland Winery, the city of Whitesburg, and the city of Jenkins.

The killing of filmmaker Hugh O'Connor by a local landowner in 1967 brought Letcher County to national attention. 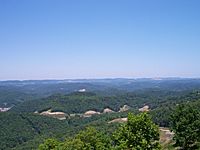 In an effort to bring tourists to Letcher County and to revitalize the local economy, the Pioneer Horse Trail is currently under construction on Pine Mountain. The trail, part of an "adventure tourism" initiative spearheaded by Governor Steve Beshear, Beshear's wife Jane, and Lieutenant Governor Daniel Mongiardo, is scheduled for completion in the spring of 2009.

However, controversy has arisen about whether or not the environment would be harmed during construction. In the summer of 2008, the Letcher County Fiscal Court had signed an agreement with state officials stating that the county would do an environmental impact study before construction would begin. Documents obtained by the Lexington Herald-Leader under Kentucky's Open Records Act showed that construction actually began before the study was to take place. County-owned bulldozers started clearing trees in part of a wildlife management area in which heavy equipment was not permitted. Environmental groups are asking the U.S. Fish and Wildlife Service to determine if any species on the threatened or endangered list were harmed. Because of the environmental impact studies, construction has been halted for the time being.

All content from Kiddle encyclopedia articles (including the article images and facts) can be freely used under Attribution-ShareAlike license, unless stated otherwise. Cite this article:
Letcher County, Kentucky Facts for Kids. Kiddle Encyclopedia.