Whitesburg is a home rule-class city in and the county seat of Letcher County, Kentucky, United States. The population was 2,139 at the 2010 census. It was named for C. White, a state politician.

Whitesburg's major newspaper is The Mountain Eagle. Founded by Nehemiah Webb in 1907, the weekly paper has been owned by the Gish family of Letcher County since 1956. The Eagle has won numerous awards for its coverage of strip mining and its environmental effects, education, and political corruption.

Whitesburg is known for its ubiquitous cut stone. The city was home to a community of Italian stonemasons who moved there with the coming of the Louisville and Nashville Railroad in 1911-1912. Those masons left their mark on the city and the surrounding county of Letcher. The city includes numerous ashlar stone retaining walls, foundations and bridge abutments, as well as several buildings covered entirely in sandstone pulled from the Kentucky River.

One of its best-known features is an arched stone bridge designed by Roy Crawford, a local mining and civil engineer and land surveyor who was educated through the International Correspondence School and in about 1925 founded R. R. Crawford Engineering, a company that remains family owned and operated. The bridge was built in 1938 across the North Fork of the Kentucky River. The downtown historic district includes many buildings built between 1914 and 1925, a time of great expansion in the town.

By 1921, all of the pre-Civil War buildings had been razed to make way for new, brick-and-stone edifices. Among the oldest commercial buildings are the former Lewis Wholesale building, built in 1914, which is now used as City Hall; the Fields Building, built 1911-1914, which now houses a restaurant, bookstore and law offices; and the Daniel Boone Hotel, a fine brick building with stone foundations and pressed metal cornice thought to have been built circa 1915. It includes several distinctive residences such as the Judge Ira Fields home (1897); the cut stone Palumbo House, and Italian villa-inspired house built by master stonemason John Palumbo; the stately Salyers House Bed and Breakfast, built for Confederate States of America Col. Logan Henry Neal Salyer in the early 20th century; and a Dutch Colonial style home ordered from the Sears Modern Home Catalog and delivered to its owner, in pieces, by railcar in 1928.

Whitesburg's streets were paved for the first time in 1924 and some of those original concrete streets are still in use. Broadway, one of those streets, is marked with the hoofprints of a cow, the footprints of chickens and of a barefoot child who ran across the street while the concrete was still wet. The Letcher County Fiscal Court completed construction of a recreation center in Whitesburg in 2011.

Residents of Whitesburg voted 2-1 on April 17, 2007, in favor of legalizing alcohol sales in restaurants which seat more than 100 people and get 70% of their revenue from food sales, known in Kentucky as 'moist' status. In 2012, city residents overwhelmingly voted to become completely 'wet,' bringing more than 60 years of prohibition in Whitesburg to its close. 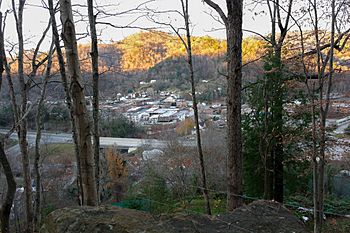 A paved rail-trail open to pedestrians and bicycles passes through the west end of the city into downtown, with future extensions planned through the eastern side of Whitesburg. The Town Hill Trail connects from downtown Whitesburg across a former wagon road to the top of Town Hill, with trail access to the communities of Cowan and Little Cowan as well as to High Rock, a large rock face on Pine Mountain. 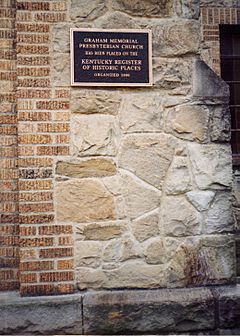 Facade of the Graham Memorial Presbyterian Church in Whitesburg, Kentucky (built in 1934 by Italian immigrant stonemasons), featuring the outline of a map of Italy

There were 642 households out of which 27.1% had children under the age of 18 living with them, 48.6% were married couples living together, 12.8% had a female householder with no husband present, and 35.8% were non-families. 34.3% of all households were made up of individuals and 15.1% had someone living alone who was 65 years of age or older. The average household size was 2.21 and the average family size was 2.82.

As a result of a survey taken subsequent to the census it was established that the city's population was made up of 3,100 residents. 1,241 households were left out of the census because neither the residents of Whitesburg's Housing Project nor residents of the Letcher Manor Nursing Home were counted in the census. When these facilities are included in the population count the number of city residents climbs to 3,100.

All content from Kiddle encyclopedia articles (including the article images and facts) can be freely used under Attribution-ShareAlike license, unless stated otherwise. Cite this article:
Whitesburg, Kentucky Facts for Kids. Kiddle Encyclopedia.