Appalshop is a media, arts, and education center located in Whitesburg, Kentucky, in the heart of the southern Appalachian region of the United States.

Appalshop was founded in 1969 as the Appalachian Film Workshop, a project of the United States government's War on Poverty. The organization was one of ten Community Film Workshops started by a partnership between the federal Office of Economic Opportunity and the American Film Institute. In 1974 the worker-operated organization evolved into a nonprofit company called Appalshop and established itself as a hub of filmmaking in Appalachia, and since that time has produced more than one hundred films, covering such subjects as coal mining, the environment, traditional culture, and the economy. The name was officially changed to reflect changing business structure and goals. 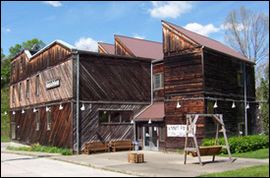 Since 1985, Appalshop has also operated WMMT-FM (Mountain Community Radio), a radio station located in Whitesburg, Kentucky which serves much of central Appalachia (including portions of eastern Kentucky, southwest Virginia, and western West Virginia) with music and programming relevant to the region and its culture. WMMT also broadcasts live on the web.

National Endowment for Humanities Grants have awarded multiple grants to Appalshop. These include $100,000 to improve the public programming initiatives and access to their collections. The National Endowment of the Humanities stated that the grant would be a ideal for this region because of thousands coal related layoffs in the region.

In July 2015 Appalshop was awarded $450,000 by ArtPlace America, which provided funding for increasing arts and technology training. The money also helped to diversify Letcher County's economy.

These grants were awarded to the Southeast Kentucky High Tech Workforce Project that was started by Appalshop. The totaled amount of money awarded was $275,000. Economic Development Administration awarded $200,000 and Appalachian Regional Commission awarded $75,000. The grants will help develop a certificate program at Southeast Kentucky Community & Technical College campuses in Letcher that will focuses on information technology and media production.

All content from Kiddle encyclopedia articles (including the article images and facts) can be freely used under Attribution-ShareAlike license, unless stated otherwise. Cite this article:
Appalshop Facts for Kids. Kiddle Encyclopedia.