Hazard is a home rule-class city in and the county seat of Perry County, Kentucky, United States. The population was 5,263 at the 2020 Census.

Local landowner Elijah Combs Sr. laid out the town in 1824 as the planned seat of the newly established Perry County. Both the town and the county were named for Cdre. Oliver Hazard Perry, the hero of the 1813 Battle of Lake Erie in the War of 1812. The post office was initially known as Perry Court House but the name was officially changed to Hazard in 1854. The city was formally incorporated by the state assembly in 1884. 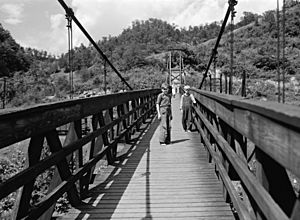 Long isolated by the surrounding mountains, Hazard was opened to the outside world by the arrival of the railroad in 1912. The only access to the valley had previously been 45 miles down the North Fork of the Kentucky River or a two-week trip over the surrounding mountains. The railroad brought boom times to the town, but the Great Depression saw prosperity end as quickly as it had begun.

The song "High Sheriff of Hazard" was written by Tom Paxton in reference to a coal miner's strike in 1964.

Although there has been a steady decline in Hazard's population since the 1950s, there have been numerous commercial and residential developments within the city. The city is also actively working on a downtown renaissance plan to rejuvenate its business district. Nonetheless, in July 1999, Hazard was the first stop on Pres. Bill Clinton's tour of poverty-stricken communities that had failed to share in the boom of the 1990s. Hillary Clinton visited Hazard on November 2, 2008, at a political rally for Democratic U.S. Senate candidate Bruce Lunsford.

According to the United States Census Bureau, the city has a total area of 7.0 square miles (18 km2), all land.

The climate in this area is characterized by hot, humid summers and generally mild to cool winters. According to the Köppen Climate Classification system, Hazard has a humid subtropical climate, abbreviated "Cfa" on climate maps.

Hazard has a lending library, the Perry County Public Library.

People who were born in or residents of Hazard include:

All content from Kiddle encyclopedia articles (including the article images and facts) can be freely used under Attribution-ShareAlike license, unless stated otherwise. Cite this article:
Hazard, Kentucky Facts for Kids. Kiddle Encyclopedia.