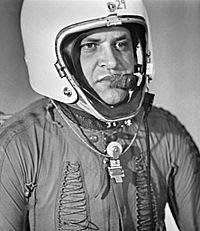 Francis Gary Powers (Jenkins, Kentucky August 17, 1929 – Los Angeles, California, August 1, 1977) was an American pilot. He was known for piloting a Central Intelligence Agency U-2 spy plane which was shot down while flying a reconnaissance mission over the Soviet Union. This caused the 1960 U-2 incident, and played a large role in the Cold War.

Powers was held as a prisoner of war in the Soviet Union. On February 10, 1962, Powers was exchanged in a spy swap in Berlin. The exchange was for Soviet KGB Colonel Vilyam Fisher, known as "Rudolf Abel", who had been caught by the FBI and tried and jailed for espionage. Powers credited his father with the swap idea. When released, Powers's total time in captivity was 1 year, 9 months, and 10 days.

All content from Kiddle encyclopedia articles (including the article images and facts) can be freely used under Attribution-ShareAlike license, unless stated otherwise. Cite this article:
Francis Gary Powers Facts for Kids. Kiddle Encyclopedia.