Big Stone Gap is a town in Wise County, Virginia, United States. The population was 5,643 at the 2010 census.

The community was formerly known as "Mineral City" and "Three Forks." The "Big Stone Gap" refers to the valley which has been created on the Appalachia Straight, located between Big Stone Gap and Appalachia. The town had hoped that its coal and iron ore deposits would make it "the Pittsburgh of the South."

The Big Stone Gap post office was established in 1856.

Big Stone Gap is home to several museums. The June Tolliver House, located on Jerome Street, is home to the Trail of the Lonesome Pine, the official outdoor drama of Virginia. 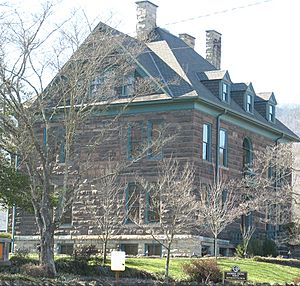 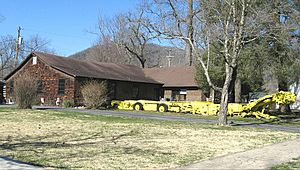 The federal building named for C. Bascom Slemp was built in 1912 and it continues to house a division of the United States District Court for the Western District of Virginia.

Big Stone Gap is home to Wallens Ridge State Prison, a state prison that has been a part of the Commonwealth of Virginia Department of Corrections since 1999. Originally opened as a supermax prison, it has recently been downgraded to a "high level" security facility. Construction and maintenance of the facility generated millions of dollars for the local economy, suppressed from a sagging history of coal mining.

According to the United States Census Bureau, the town has a total area of 4.9 square miles (12.6 km2), all land.

Big Stone Gap is closer to the state capitals of seven other states than it is to Richmond, VA, its own state capital, with regards to highway mileage. The other state capitals are Columbus, OH; Frankfort, KY; Charleston, WV; Nashville, TN; Raleigh, NC; Columbia, SC; and Atlanta GA. Additionally Indianapolis, Indiana is only six miles farther from Big Stone Gap than Richmond.

There were 1,995 households out of which 29.6% had children under the age of 18 living with them, 48.7% were married couples living together, 15.3% had a female householder with no husband present, and 33.2% were non-families. 30.8% of all households were made up of individuals and 13.8% had someone living alone who was 65 years of age or older. The average household size was 2.34 and the average family size was 2.92.

Adriana Trigiani, who wrote the script for the movie Big Stone Gap, lobbied to have the film shot on location. The former gas station that was the setting for Carmine's restaurant in the movie still contains the soda fountain, tables and nostalgic wall posters used during filming. Next to it is the vacant Mutual's Pharmacy, where Ave Marie Mulligan, the main character in the movie, worked.

An EF-1 tornado touched down March 4, 2008, on Highway 58, running through downtown. The tornado caused a 300 yard wide, one mile long path of damage. It destroyed six homes, caused major damage to 15 homes, and minor damage to 25 others. The tornado hit an area of the town named Poplar Hill.

All content from Kiddle encyclopedia articles (including the article images and facts) can be freely used under Attribution-ShareAlike license, unless stated otherwise. Cite this article:
Big Stone Gap, Virginia Facts for Kids. Kiddle Encyclopedia.