Appalachia is a town in Wise County, Virginia, United States. The population was 1,754 at the 2010 census.

The Appalachia post office was established in 1898. The community was named for the surrounding Appalachian Mountains.

In 2006, fourteen Appalachia residents, including mayor Ben Cooper and the police chief, were indicted on charges relating to a electoral fraud conspiracy. Cooper was convicted of intercepting absentee ballots and changing the votes on them; buying votes with beer, cigarettes, and pork rinds; and conspiring with his appointee, the police chief, to steal money and other items from residents, among 243 felony charges. Ten other conspirators pleaded guilty and received fines or short jail sentences.

According to the United States Census Bureau, the town has a total area of 2.3 square miles (6.0 km²), all of it land. 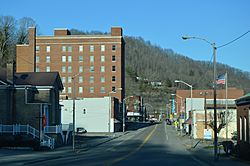 Appalachia is surrounded by numerous coal camp communities, including Andover, Arno, Derby, Imboden, Exeter, Dunbar, Pardee, Osaka, Roda, and Stonega. Many of these communities formed at the beginning of the twentieth century with the arrival of the mining and railroad industry.

There were 790 households, out of which 29.2% had children under the age of 18 living with them, 43.4% were married couples living together, 17.3% had a female householder with no husband present, and 34.8% were non-families. 33.4% of all households were made up of individuals, and 16.7% had someone living alone who was 65 years of age or older. The average household size was 2.33 and the average family size was 2.95.

Each year, usually in the first week of August, the residents of Appalachia and the surrounding area celebrate their heritage in a week-long celebration known as Coal/Railroad Days. The festival includes a 5K road race, music concerts at the town's amphitheater, amusement rides, street vendors, a parade, and numerous other festival type events. Twice, Coal/Railroad days has coincided with other celebrations in Appalachia. In 2000 the town took part in a mass high school reunion, known as Appy 2000. In 2006, the festival was part of the Appalachia 100 celebration that marked the 100th birthday of the Town of Appalachia.

Prior to the 2011 school year the Appalachia High School Bulldogs was merged with the Powell Valley High School Vikings in neighboring Big Stone Gap to become the Union High School Bears. In May 2017, Appalachia Elementary School was formally closed.

All content from Kiddle encyclopedia articles (including the article images and facts) can be freely used under Attribution-ShareAlike license, unless stated otherwise. Cite this article:
Appalachia, Virginia Facts for Kids. Kiddle Encyclopedia.