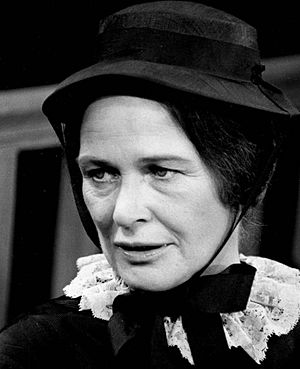 Colleen Dewhurst (June 3, 1924 – August 22, 1991) was an American and Canadian actress. She played Helen Benson in Man on a String. She also played Monique in The Last Run. She was also a stage actress.

Dewhurst was born in Montreal, Quebec. She died in South Salem, New York of cervical cancer at the age of 67.

All content from Kiddle encyclopedia articles (including the article images and facts) can be freely used under Attribution-ShareAlike license, unless stated otherwise. Cite this article:
Colleen Dewhurst Facts for Kids. Kiddle Encyclopedia.