John Marcellus Huston (August 5, 1906 – August 28, 1987) was an Irish-American film director, screenwriter and actor. Huston was a citizen of the United States by birth but renounced U.S. citizenship to become an Irish citizen and resident. He returned to reside in the United States where he died. He wrote the screenplays for most of the 37 feature films he directed, many of which are today considered classics: The Maltese Falcon (1941), The Treasure of the Sierra Madre (1948), The Asphalt Jungle (1950), The African Queen (1951), The Misfits (1961), Fat City (1972) and The Man Who Would Be King (1975). During his 46-year career, Huston received 15 Oscar nominations, won twice, and directed both his father, Walter Huston, and daughter, Anjelica Huston, to Oscar wins in different films.

Huston was known to direct with the vision of an artist, having studied and worked as a fine art painter in Paris in his early years. He continued to explore the visual aspects of his films throughout his career, sketching each scene on paper beforehand, then carefully framing his characters during the shooting. While most directors rely on post-production editing to shape their final work, Huston instead created his films while they were being shot, making them both more economical and thought provoking, with little editing needed.

Most of Huston's films were adaptations of important novels, often depicting a "heroic quest," as in Moby Dick, or The Red Badge of Courage. In many films, different groups of people, while struggling toward a common goal, would become doomed, forming "destructive alliances," giving the films a dramatic and visual tension. Many of his films involved themes such as religion, meaning, truth, freedom, psychology, colonialism and war.

Huston has been referred to as "a titan", "a rebel", and a "renaissance man" in the Hollywood film industry. Author Ian Freer describes him as "cinema's Ernest Hemingway"—a filmmaker who was "never afraid to tackle tough issues head on." 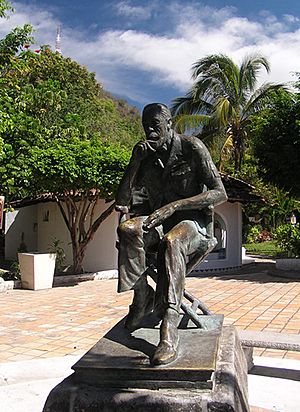 Huston received 15 Oscar nominations in the course of his career, and is the oldest person ever to be nominated for the Best Director Oscar when, at 79 years old, he was nominated for Prizzi's Honor (1985). He won two Oscars, for directing and writing the screenplay for The Treasure of the Sierra Madre. Huston also won a Golden Globe for that film. He received the Life Achievement Award from the American Film Institute in 1983, and the Career Achievement Award from the U.S. National Board of Review of Motion Pictures in 1984.

He also has the unique distinction of directing both his father Walter and his daughter Anjelica in Oscar-winning performances (in The Treasure of the Sierra Madre and Prizzi's Honor, respectively), making the Hustons the first family to have three generations of Academy Award winners. He also directed her in Sinful Davey in 1969.

In 1960, Huston was honored with a star on the Hollywood Walk of Fame for his contribution to motion pictures.

In 1965, Huston received the Laurel Award for Screenwriting Achievement from the Writers Guild of America.

In 1981 his film Escape to Victory was nominated for the Golden Prize at the 12th Moscow International Film Festival.

A statue of Huston, sitting in his director's chair, stands in Plaza John Huston in Puerto Vallarta, Mexico. 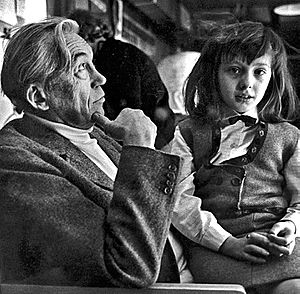 To producer George Stevens, Jr., Huston symbolized "intellect, charm and physical grace" within the film industry. He adds, "He was the most charismatic of the directors I knew, speaking with a soothing, melodic voice that was often mimicked, but was unique to him."

Huston loved the outdoors, especially sports such as hunting while living in Ireland. Among his life's adventures before becoming a Hollywood filmmaker, he had been an amateur boxer, reporter, short-story writer, portrait artist in Paris, a cavalry rider in Mexico, and a documentary filmmaker during World War II. Stevens describes him as someone who "lived life to its fullest". Barson even suggests that Huston's "flamboyant life" as a rebel would possibly make for "an even more engaging tale than most of his movies".

His daughter, Anjelica Huston, notes that he did not like Hollywood, and "especially despised Beverly Hills, he thought it was just fake from the ground up. He didn't like any of that; he was not intrigued or attracted by it." She notes that, in contrast, "he liked to be in the wild places; he liked animals as much as he liked people.

He was married five times over the course of his life.

A heavy smoker, he was diagnosed with emphysema in 1978. By the last year of his life he could not breathe for more than twenty minutes without needing oxygen. He died on August 28, 1987, in his rented home in Middletown, Rhode Island, from pneumonia as a complication of lung disease. Huston is interred in the Hollywood Forever Cemetery in Hollywood with his mother.

All content from Kiddle encyclopedia articles (including the article images and facts) can be freely used under Attribution-ShareAlike license, unless stated otherwise. Cite this article:
John Huston Facts for Kids. Kiddle Encyclopedia.