Samuel Dashiell Hammett (May 27, 1894 – January 10, 1961) was an American author of crime fiction, a screenplay writer, and political activist. Some of the characters he created are Sam Spade (The Maltese Falcon), Nick and Nora Charles (The Thin Man), and the Continental Op (Red Harvest and The Dain Curse).

In addition to the large influence his novels and stories had on film, Hammett "is now widely regarded as one of the finest mystery writers of all time". Time magazine included Hammett's 1929 novel Red Harvest on a list of the 100 best English-language novels published between 1923 and 2005.

Hammett was born on a farm in St. Mary's County, in Maryland. His parents were Richard Thomas Hammett and Anne Bond Dashiell. Hammett was baptized a Catholic. He grew up in Philadelphia and Baltimore. "Sam," as he was known before he began writing, left school when he was 13 years old. He had several jobs before working for the Pinkerton National Detective Agency. He served as an operative for the Pinkertons from 1915 to February 1922. He took time off to serve in World War I. He did not like the agency's role in union strike-breaking.

Hammett enlisted in the United States Army in 1918. He became ill with the Spanish flu and later got tuberculosis. He spent most of his time in the Army as a patient in Cushman Hospital, Tacoma, Washington. While there he met a nurse, Josephine Dolan, whom he later married.

Hammett and Dolan were married, and they had two daughters, Mary Jane (born 15 October 1921) and Josephine (born in 1926). Because of Hammett's tuberculosis, Josephine and the children could not live with him full time. Josephine rented a home in San Francisco, where Hammett would visit on weekends. The marriage soon ended. He continued to financially support his wife and daughters with the income he made from his writing.

Hammett used his experiences as a Pinkerton operative. Hammett said: "All my characters were based on people I've known personally, or known about."

Hammett wrote most of his detective fiction during the time he was living in San Francisco (the 1920s). Specific streets and locations in San Francisco are frequently mentioned in his stories.

From 1929 to 1930 Dashiell was romantically involved with Nell Martin, an author of short stories and several novels. He dedicated The Glass Key to her, and in turn, she dedicated her novel Lovers Should Marry to Hammett.

In 1931, Hammett started a 30-year affair with playwright Lillian Hellman. This relationship was shown in the film Julia. Hammett was played by Jason Robards and Hellman by Jane Fonda.

He wrote his final novel in 1934. He spent the rest of his life to left-wing activism. He was a strong anti-fascist through the 1930s. In 1937 he joined the American Communist Party.

In early 1942, after the attack on Pearl Harbor, Hammett again enlisted in the United States Army. He was a disabled veteran of World War I, and a victim of tuberculosis, but he was allowed to join. He served in the Aleutian Islands. He edited an Army newspaper. He also got emphysema. .

After the war, Hammett returned to political activism. He was elected President of the Civil Rights Congress (CRC) on June 5, 1946.

During the 1950s he was investigated by Congress. This was part of Senator Joseph McCarthy's attempt to identify Communists. He refused to share information and was blacklisted. 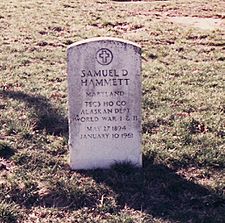 A lifetime's heavy drinking of alcohol and cigarettes made Hammett's tuberculosis worse. As the years of the 1950s went on, Hammett became "a hermit". Hammett no longer could live alone, so the last four years of his life he spent with Hellman. On January 10, 1961, Hammett died in New York City's Lenox Hill Hospital, of lung cancer. He had been diagnosed just two months before. As a veteran of two World Wars, he was buried at Arlington National Cemetery.

All the novels except The Thin Man were originally in three, four, or five parts in various magazines.

All content from Kiddle encyclopedia articles (including the article images and facts) can be freely used under Attribution-ShareAlike license, unless stated otherwise. Cite this article:
Dashiell Hammett Facts for Kids. Kiddle Encyclopedia.