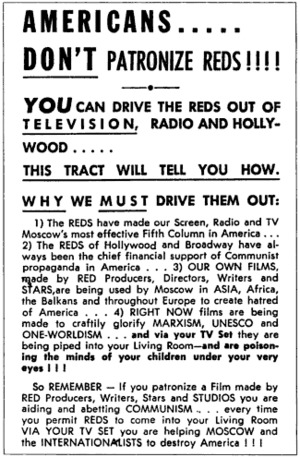 Anticommunist tract from the 1950s. It encourages people to drive the "Reds" (Communists) out of Hollywood and Broadway

The Hollywood blacklist was a system of denying employment to Hollywood actors, producers, screenwriters, directors, and other people in entertainment who were suspected of undesirable political connections or other undesirable associations. Communist sympathies and homosexual tendencies were two of the connections considered most undesirable. It mostly occurred through the middle of the 20th century, in the 1940s and 1950s.

All content from Kiddle encyclopedia articles (including the article images and facts) can be freely used under Attribution-ShareAlike license, unless stated otherwise. Cite this article:
Hollywood blacklist Facts for Kids. Kiddle Encyclopedia.