Sandy Hook is a village in the town of Newtown, Connecticut. Sandy Hook was founded in 1711.

It borders the Botsford section of town, Newtown borough, and also the towns of Monroe, Southbury and Oxford along the Housatonic River. The village of Sandy Hook includes the communities of Berkshire, Riverside, Walnut Tree Hill, and Zoar, which also extends for a short distance into the Town of Monroe along Old Zoar Road and Bagburn Hill/Jordan Hill Road.

Within a year of the settlement of Newtown, some of its proprietors began moving away from the central village to some of their larger parcels. Several proprietors with land in the same area relocated to these areas together to reduce isolation. Sandy Hook was one of the first of the outlying areas settled. Colonists found the Pootatuck River at Sandy Hook allowed for the setting up of saw and grist mills. The neighborhood would not grow dramatically until the industrialization of the mid 19th century.

On December 14, 2012[update], Adam Lanza shot his mother at home, then killed 26 people and himself at Sandy Hook Elementary School. It was the second-deadliest[update] mass shooting in U.S. history at the time, after the 2007 Virginia Tech shootings. 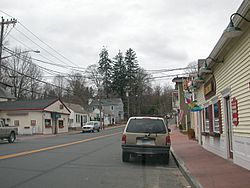 All content from Kiddle encyclopedia articles (including the article images and facts) can be freely used under Attribution-ShareAlike license, unless stated otherwise. Cite this article:
Sandy Hook, Connecticut Facts for Kids. Kiddle Encyclopedia.