The primary unit of local government in the U.S. state of Connecticut is its 169 towns. Each of these towns may contain incorporated cities or boroughs, as well as unincorporated villages.

New England towns are geographically similar to civil townships in that the entire territory of the state is completely subdivided into towns. However, they differ primarily in that New England towns, particularly in Connecticut, have broad home rule, and have powers comparable to those that a city in other states would normally have. There are advantages and disadvantages to this system: residents have a greater voice in the decision-making process over local issues. On the other hand, the state's delegation of broad powers to the towns sometimes results in bitter rivalries between towns stemming from projects and programs that encompass multiple towns, as town residents and officials have historically placed local interests ahead of the interests of the region or state as a whole. Decades of legal battles between Bridgeport and Stratford over the expansion of Sikorsky Airport and political fighting between Norwalk and Wilton surrounding construction of the US 7 Freeway are examples.

Connecticut is divided geographically into eight counties, but these counties do not have any associated government structure. The Connecticut General Assembly abolished all county governments on October 1, 1960. The counties continued to have sheriffs until 2000, when the sheriffs' offices were abolished and replaced with state marshals through a ballot measure attached to the 2000 presidential election. Counties are, however, still used by the state to organize its judicial and state marshal system. Connecticut's court jurisdictions still adhere to the old county boundaries, with the exception of Fairfield, Hartford, and New Haven counties, which have been further subdivided into multiple court jurisdictions due to their relatively large populations.

The dissolution of county governments in 1960 created an absence of a regionally-oriented governmental level, which created problems when it came to land use and infrastructure planning. Because the power once reserved for county governments was now in the hands of municipal administrations, major land use, environmental, and infrastructure issues often pitted one town against another, sometimes resulting in little or no progress on some projects. Complicating this, the state constitution delegates a large portion of the state's authority to the towns. That means a major multi-town project could be completely derailed if only one of the affected towns opposes the project, since the project would require each affected town to issue its own permits for the portions within its territory. This has often led to long and costly lawsuits between towns that support a regional-scale project and those opposed.

In an effort to resolve these conflicts, the State of Connecticut passed legislation in the 1980s establishing fifteen regional councils, which cluster towns with similar demographics into an administrative planning region, instead of adhering to the old county structure. In 2013, the Connecticut Office of Policy and Management approved a merger of the Connecticut River Estuary and the Midstate planning regions to form the Lower Connecticut River Valley Planning Region. See sidebar for prior region alignment.

In 2014 The Office of Policy and Management (OPM) recently completed a comprehensive analysis of the boundaries of logical planning regions in Connecticut under Section 16a-4c of the Connecticut General Statutes (2014 Supplement). This analysis resulted in the number of planning regions being reduced from the original fifteen (15) to nine (9), as a result of four (4) voluntary consolidations and the elimination of two (2) planning regions. As required by statute, the OPM notified the chief executive officer (CEO) in each municipality that was proposed for redesignation and offered them a thirty (30) day period to appeal the proposed redesignation. Of the seventeen municipalities that were proposed for redesignation by OPM, only three opted to exercise their right to appeal. OPM staff attended meetings in Bristol, Burlington and Plymouth, and subsequently granted each of the appeals.

The newly consolidated planning regions are:

Unlike county governments, the authority of regional councils is limited to land use policymaking, infrastructure development, emergency preparedness, and long-term planning for population and economic changes for the communities within their respective jurisdiction. The regional councils have no taxing authority; they are financed by funds from the state and member towns.

Connecticut’s planning regions provide a geographic framework within which municipalities can jointly address common interests, and coordinate such interests with state plans and programs. State statutes authorize the secretary of the Office of Policy and Management (OPM) to designate or redesignate the boundaries of logical planning regions, whereas the member municipalities of each planning region are authorized under separate state statutes to establish a formal governance structure known as a regional council of governments (RCOG). 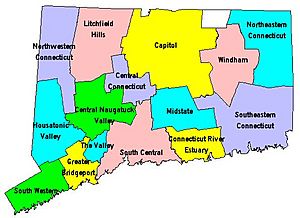 Regional Council of Governments of Connecticut as of 2013

Connecticut has a number of informal regions, that have no governmental unit associated with them, although may generally correspond to a regional planning agency or council of government boundary.

Towns are officially creatures of the state, and their powers are set forth by statute and the state constitution. In practice, as is the case in most of New England, their authority has been very broadly construed, and there is a long-standing tradition of local autonomy.

Towns traditionally had the town meeting form of government, which is still used by some of the 169 towns. Under Connecticut's Home Rule Act, any town is permitted to adopt its own local charter and choose its own structure of government. The three basic structures of municipal government used in the state, with variations from place to place, are the selectman–town meeting, mayor–council, and manager–council.

There are currently twenty incorporated cities in Connecticut. Nineteen of these cities are coextensive with their towns, with the city and town governments also consolidated. One incorporated city (Groton) has jurisdiction over only part of its town. All cities are treated by the Census Bureau as incorporated places regardless of the settlement pattern.

In addition to cities, Connecticut also has a type of dependent municipality known as a borough. Boroughs are usually the populated center of a town that decided to incorporate in order to have more responsive local government. When a borough is formed, it is still part of and dependent on its town. There are currently nine incorporated boroughs in Connecticut. One borough is coextensive and consolidated with its town. The other eight boroughs have jurisdiction over only a part of their town. All boroughs are treated by the Census Bureau as incorporated places. Since 1989, the Census Bureau has also listed Groton Long Point as a borough even though it has not been incorporated as a borough but is only a multi-purpose special services district within the town of Groton.

Connecticut also has a fair number of non-incorporated communities that are known locally as villages (usually in more rural areas), neighborhoods or "sections of" a city or town. "Villages" in this local Connecticut sense have no separate legal/corporate existence from the town they are in, although a taxing district or volunteer fire department sharing the name of the village may exist for specific services. With some exceptions, people who reside within a village often identify with the town rather than the village. Some villages and named sections of towns and cities were formerly incorporated as boroughs. Some villages are associated with historic districts which can serve to preserve some part of their more historically well preserved areas.

Some village and section names are also used as post office names or as the basis for naming census-designated places (CDPs), although the postal delivery area or CDP associated with the name often is considerably larger than the associated village or section. Some examples of villages, neighborhoods, and sections that have given their names to post offices or CDPs are Falls Village, Mystic, Niantic, Quaker Hill, South Kent, Stafford Springs, and Whitneyville.

All content from Kiddle encyclopedia articles (including the article images and facts) can be freely used under Attribution-ShareAlike license, unless stated otherwise. Cite this article:
Local government in Connecticut Facts for Kids. Kiddle Encyclopedia.