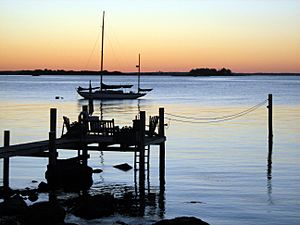 Groton Long Point (GLP) is located within the town of Groton, on Fishers Island Sound, in New London County, Connecticut, United States. The year-round population was 518 at the 2010 census.

The area is administered by the Groton Long Point Association (GLPA), a private association that was established by Special Act of the Connecticut Legislature in 1921. The act is the charter of the GLPA and enables the Association to tax and issue bonds to provide services independent of the town of Groton; typically, such municipal corporations provided services that the larger township could not or would not provide. Pursuant to the act, the GLPA has the same governmental powers as a borough. Today, such a special taxing district can be formed by Connecticut residents on their own without special acts of the Legislature. The area is treated by the U.S. Census Bureau as a borough, although it is not formally incorporated as such.

Summer in Groton Long Point runs roughly from mid-June to early September. The actual living population of the town is dramatically larger during the summer months, as nearly every property is either occupied by its owners or rented to summer tenants. The Groton Long Point Yacht Club is a cross between a traditional yacht club and a summer camp, as it runs many classes for children. These include swimming, sailing, sports, and tennis lessons. The Yacht Club also organizes evening events such as dances, movies, and scavenger hunts for children; events are also organized for adults and families, including concerts (at nearby Esker Point), dances, and fireworks.

Being a summer community, Groton Long Point experiences something of an exodus in early September, as many of the summer families and the renters exit, leaving only a small number of full-time residents in the fall, winter, and spring months. Children remaining often attend nearby Fitch Senior High School in Groton.

The Point is protected year-round by the Groton Long Point Volunteer Fire Department, established in 1951. Its purpose is "the preservation of lives and property, the extinguishment of fires, the provision of emergency medical services and social assembly". The Fire Department host events year round, from the 4th of July parade to a Halloween party.

There were 306 households, out of which 20.6% had children under the age of 18 living with them, 58.2% were married couples living together, 6.2% had a female householder with no husband present, and 33.0% were non-families. 30.1% of all households were made up of individuals, and 10.1% had someone living alone who was 65 years of age or older. The average household size was 2.18 and the average family size was 2.70. 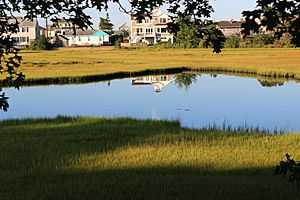 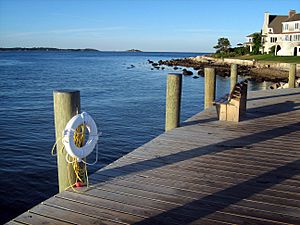 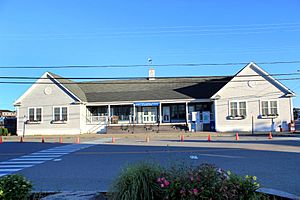 All content from Kiddle encyclopedia articles (including the article images and facts) can be freely used under Attribution-ShareAlike license, unless stated otherwise. Cite this article:
Groton Long Point Facts for Kids. Kiddle Encyclopedia.