Oxford is a residential town located in western New Haven County, Connecticut, United States. The population was 12,706 at the 2020 Census. Oxford is the 26th-wealthiest town in the state by median household income. Distinct settled areas in the town include Oxford Center, Quaker Farms, and Riverside. Oxford belongs to the Bridgeport–Stamford–Norwalk Metropolitan Statistical Area, a subregion of the New York metropolitan area.

In the 18th century, farmers herded livestock through Oxford from as far away as Litchfield on the way to the port of New Haven. In the 19th century, the town lost population as farmers moved to work in better-paying factories.

Oxford was incorporated in October 1798.

There were 4,504 households, out of which 34.9% had children under the age of 18 living with them, 71.4% were headed by married couples living together, 6.9% had a female householder with no husband present, and 18.5% were non-families. 14.2% of all households were made up of individuals, and 6.1% were someone living alone who was 65 years of age or older. The average household size was 2.81, and the average family size was 3.12.

Museum Hours: First and Third Sundays of each month 2 - 4 p.m. 60 Towner Lane, Oxford, CT.
The people of Oxford and the Oxford Historical Society were honored for their work in preserving the Homestead, and designated with a Connecticut Trust Preservation Award. The award was presented in Hartford at the State Capitol on April 4, 2012. The following is from the Connecticut Trust website: "Built in 1755, this house has a long connection with prominent local families and is listed on the State Register of Historic Places. When development threatened the house, the developer was convinced to donate it to the Town. Moved to a new, town-owned site, the house received a new foundation and chimney base, and was restored by the Oxford Historical Society. A multitude of workers donated their labor to the project, including members of building trades, Boy and Girl Scouts, area foundations, and many local volunteers. The people of Oxford succeeded where many towns and small nonprofits fail by involving a wide range of people throughout the community. The task of managing so many different groups and individuals alone is a remarkable achievement. " Source: http://www.cttrust.org/12635 (added March 26, 2015)

Among the parks serving Oxford residents are Southford Falls State Park in the northern section of town, Jackson Cove Beach, and Kirks Pond in the center of town. The 10.4-mile (16.7 km) Larkin State Bridal Trail, created in the 1940s from the path of a former train track, is one of the earliest examples of the "rails-to-trails" movement.

The Golf Club at Oxford Greens, a public golf course with over 400 homes for "active adults" over the age of 55, is located in town.

In 2001, Oxford made international headlines when 94-year-old Ottilie Lundgren mysteriously died of anthrax. At the time, there was a spread of anthrax attacks in New York and Washington, and this case baffled law enforcement. No additional cases in the area suggested Lundgren's death was the result of accidental cross-contamination of the mail.

A University of Connecticut development study spanning 1985-2006 showed that Oxford had the largest increase of development by percentage, growing 62% during that time. The median household income in town grew 20%, ranking Oxford the 26th wealthiest of 169 communities in the state.

Oxford has two elementary schools, one middle school, and a high school.

Oxford High School is a member of the Naugatuck Valley League, or NVL, for athletics. 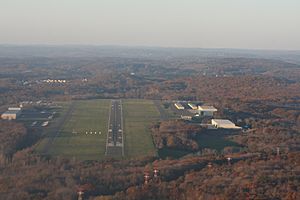 The town is bisected by Connecticut Route 67 that begins in Woodbridge and ends in New Milford. Route 188 runs through the Quaker Farms section of town. Other major roads in town are Route 34 along the Housatonic River (and which crosses the Housatonic into Monroe via the Stevenson Dam Bridge) and Route 42 in the eastern section of town.

Waterbury-Oxford Airport, with the second largest runway in Connecticut is located in Oxford and Middlebury. The airport, which is owned and operated by the Connecticut Department of Transportation, has become one of the largest and fastest growing corporate aviation centers in the Northeast. There are 252 aircraft based at the airport, with 80 of those aircraft being large corporate business jets.

All content from Kiddle encyclopedia articles (including the article images and facts) can be freely used under Attribution-ShareAlike license, unless stated otherwise. Cite this article:
Oxford, Connecticut Facts for Kids. Kiddle Encyclopedia.