Naugatuck is a consolidated borough and town in New Haven County, Connecticut, United States. The town spans both sides of the Naugatuck River just south of Waterbury, and includes the communities of Union City on the east side of the river, which has its own post office, Straitsville on the southeast (along Route 63), and Millville on the west (along Rubber Avenue). As of the 2010 census, Naugatuck had a population of 31,862.

Naugatuck was settled in 1701 as a farming community in rural western Connecticut. As the Industrial Revolution commenced, Naugatuck was transformed into a hardscrabble mill town like its neighbors in the Naugatuck Valley. 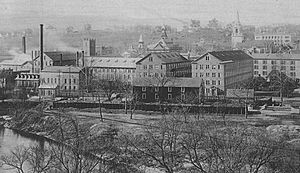 Rubber was the chief manufactured product. Charles Goodyear worked at his brother's rubber company, the Goodyear Metallic Rubber Shoe Company & Downtown Naugatuck, until the company was consolidated into the United States Rubber Company. The United States Rubber Company (renamed Uniroyal Inc. in 1961) was founded in Naugatuck in 1892 as a consolidation of nine rubber companies, and maintained their corporate headquarters there until the 1980s. Their Footwear Division manufactured Keds sneakers in Naugatuck from 1917 until the 1980s. U.S. Rubber also produced Naugahyde in a Naugatuck factory, but it is no longer produced there.

Due to an increase in the price of sulfuric acid, which was needed for the process then used for reclaiming old rubber, the United States Rubber Co. formed the Naugatuck Chemical Company on June 1, 1904, and the company soon was in the forefront of the chemical industry in the United States. Naugatuck Chemical remained a subsidiary of the U.S. Rubber Co. until, under Uniroyal, it gained independence as Uniroyal Chemical Co. They moved their operations to Middlebury, Connecticut, in the 1970s.

The Risdon Manufacturing Company, established in Naugatuck around 1910, began by producing safety pins. Local housewives and children were often hired to attach the pins to cardboard for easy sale. Risdon became the manufacturer of total packaging for cosmetics, personal, household and other consumer products and home sewing notions such as common pins, needles, snaps and other accessories. It is now the Crown Risdon Co., headquartered in Watertown, Connecticut.

In the 1960 Harold Barber founded H. Barber and Sons in the community. The company builds beach rakes for picking up debris and grooming beaches and claims to be the largest such business in the world.

Naugatuck was the home to Peter Paul, the Hershey Foods division that produces Almond Joy and Mounds candy bars, until the Hershey Co. closed the Peter Paul factory in November 2007.

The normally peaceful Naugatuck River that flows through Naugatuck overflowed its banks on August 19, 1955. Fed by over 10 inches (250 mm) of rain from Hurricane Diane, the river cut a path of destruction that forever changed the face of Naugatuck. 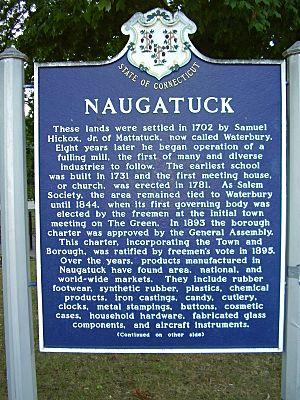 As American manufacturing declined in the late 20th century, the mills closed and the town fell on largely hard times. With the expansion of suburbs, especially in New Haven and Fairfield County, the town is now largely a bedroom community for the middle class. With this, many of Naugatuck's neighbors are fairly wealthy. Middlebury and Oxford are affluent towns that have higher performing school districts, but the price to live in these suburbs is high. Currently, many new more expensive homes are being built as people from Fairfield County and other areas are looking for more affordable housing and convenient access to major highways. 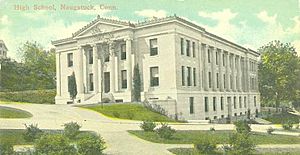 The local high school, Naugatuck High School, has a storied football rivalry with the high school in Ansonia that is one of the longest in America. Like the other rival high schools in the Naugatuck Valley, the two teams meet the morning of Thanksgiving Day. The first meeting was in 1900. Ansonia is the long-term winner in the series. Naugatuck High School's mascot is the greyhound, and its colors are garnet and grey.

The town of Naugatuck is affectionately referred to as "Naugy" by its residents. The town common features 11 commissions by the renowned New York architecture firm of McKim, Mead & White.

Naugatuck is also no stranger when it comes to being in popular media. In 2008, an episode of Food Paradise (Sandwich Paradise) on the Travel Channel highlighted the Nardelli's Grinder Shoppe, its specialty(s) Italian grinder sandwiches ("Meat Combo"). The town has also been used as a filming location for works such as Engine Trouble, released in 2002, and War of the Worlds, filmed at the former Uniroyal plant and released in 2005. (The plant was demolished on February 28, 2008.)

Naugatuck has experienced significant economic and budgetary problems since 2009 resulting from the 2008 a recession and poor budgeting since then. Even though the credit ratings has remained stable, reliance on one time revenues to pay for budget increases and increasing costs in the public employee union contracts has resulted in Naugatuck having one of the highest mill rates in the state.

Critics point out issues with public employee pensions negotiated by former Mayor Robert Mezzo which resulted in many employees retiring with pensions equaling 120% and greater of their yearly salaries. These employees, retiring in their 50's, are expected to be receiving the pensions for the next 20–40 years. Currently Naugatuck's mill rate is 45.57. 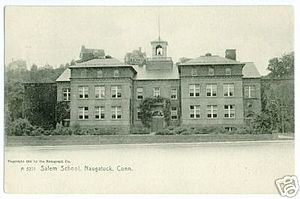 Salem School, from a 1905 postcard

Naugatuck has a total of 5 public elementary schools (which include grades K-4), 2 public intermediate schools (grades 5-6), 1 public middle school (grades 7-8), and 1 public high school (grades 9-12). The high school has an overall enrollment of 1,267 students and a graduation rate of 82%.

In 2013, an $81 million renovation for the high school took place and was completed by the fall of 2015 that brought the school up to date and back to mint condition.

Naugatuck High School was ranked 149th best in Connecticut. This is near the bottom of all public high schools in Connecticut. Although well funded, many years of mismanagement by the elected Board of Education, has led to this poor rating. In recent years, a mostly new Board of Education and a new Superintendent has helped improve the quality of education in the school district.

All content from Kiddle encyclopedia articles (including the article images and facts) can be freely used under Attribution-ShareAlike license, unless stated otherwise. Cite this article:
Naugatuck, Connecticut Facts for Kids. Kiddle Encyclopedia.