Derby ('dər-bē) is a city in New Haven County, Connecticut, United States, approximately 8 miles west-northwest of New Haven. It is located in southwest Connecticut at the confluence of the Housatonic and Naugatuck Rivers. It borders the cities of Ansonia to the north and Shelton to the southwest, and the towns of Orange to the south, Seymour to the northwest, and Woodbridge to the east. The population was 12,325 at the 2020 census. It is the smallest city in Connecticut by area, at 5.3 square miles.

Derby was settled in 1642 as an Indian trading post under the name Paugasset. It was named after Derby, England, in 1675. It included what are now Ansonia, Seymour, Oxford, and parts of Beacon Falls. 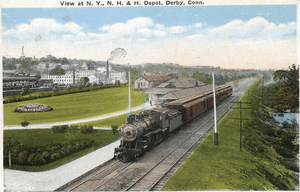 Derby was settled in 1642 as an Indian trading post under the name Paugasset. It was named after Derby, England, in 1675.

In the 19th century, both corsets and hoop skirts were manufactured in the city.

In 1872, the Derby Silver Company began production. In 1898, the company became a division of the International Silver Company headquartered in Meriden, CT, but continued making silver with its brand name until 1933.

Charlton Comics, a comic book publishing company that existed from 1944 to 1986, was based in town.

Polish immigrants have left a large mark on the demographics of the town, with 18% of all residents claiming Polish as their ethnicity and 2% as having been born in Poland. Due to this large population, the town features several Polish shops, restaurants, and clubs. Saint Michael's the Archangel Parish, a Roman Catholic church, serves mass in Polish as well as English.

A high percentage of Derby residents trace their ancestry back to Italy. 27.3% of inhabitants claim Italian ancestry, ranking it 8th in the State of Connecticut. Derby is located in New Haven County, which has one of the highest percentages of Italian-Americans in the United States.

Derby sites on the National Register of Historic Places 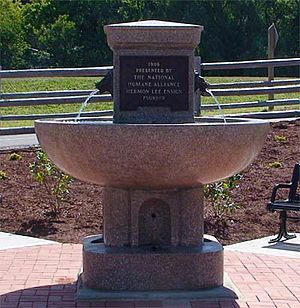 This is the National Humane Alliance fountain given to Derby, CT in 1906 and restored in 2007 as a gateway to the Derby Greenway. The fountain has three levels. The top level contains spigots in the shape of lion's heads for humans. Below that is a large circular bowl for horses and at the base are smaller bowls for dogs and cats.

The city has resurrected its National Humane Alliance fountain – a century-old granite structure with lion-head spigots—as part of a gateway entrance plaza at the Division Street entrance to the Derby Greenway. The fountain was given to the City in 1906 by the National Humane Alliance and erected at the intersection of Seymour and Atwater Avenues. The water was first turned on on June 1, 1906. Years later it was moved to Founders Commons when traffic patterns made its original location a problem. It fell into disrepair and was not used as a fountain while on Founders Commons. When the Derby Greenway was built, the fountain was moved to its new location on June 22, 2006, fully restored with new plumbing and new lions heads and formally dedicated with the surrounding Derby Hall of Fame Plaza on September 1, 2007.

The Howe House "will become home of the Lower Naugatuck Valley Industrial Heritage Center; where the Derby Historical Society's extensive collection of Industrial Era artifacts will be properly displayed. Future educational programs will include student hands-on programs that will introduce the Industrial Revolution and the Valley's active role in this period."

In 2018, a development group working with the owners of the Baretta Landscaping property submitted a conceptual design to the planning and zoning commission for a four-phase 400-unit high density residential and commercial development on Factory Street in downtown Derby. The project, called Factory Street Square, was to be built in four phases over the next four to six years on unused light industrial property. The proposed buildings would sit on five acres of near-vacant land, and would be four stories high with first floor retail shops and restaurants, with residential space above. The project, tailored toward attracting Millennials and empty nesters to the area, will offer amenities not seen in other residential complexes in the city, including a health club; indoor golf simulator; rooftop garden; dog-sitting, walking, and grooming service; and an in-complex library. The site is located one block from rail and bus lines that meet at the Derby-Shelton Railroad Station, making the project a transit-oriented development. The project was expected to begin in late 2019 to early 2020.

South side of Main Street

Since 2003, the city and state have been demolishing buildings on the south side of Main Street (Connecticut Route 34) in order to widen the roadway from two to four lanes divided by a median. Multiple development projects have been proposed, from high density mixed use to big-box retail plazas, but none have been successful. In 2019, the last four buildings on the south side of Main Street were demolished; following delays, the widening project had a tentative construction start date of early 2020. The Factory Street Square project is the most recent proposal. Rather than attempting to redevelop the entire 23-acre parcel, the proposal only encompasses five acres.

In 2014, Valley Bowl, a popular local bowling alley, was razed to erect a modern shopping plaza and realign an offset intersection. New retailers were an Aldi Supermarket, Panera Bread, PetValu, AT&T, and Popeyes. The realignment of the entrance was a joint venture between the Pershing Square developers and the developers of the adjacent property, Red Raider Plaza. Shortly after the completion of the plaza, it was purchased by Greenwich-based Urstadlt Biddle Properties Inc. for $9 million.

In 2011, Walgreen Company, a national retail pharmacy chain, purchased Red Raider Plaza for $7.15 million with plans to remodel one of the buildings and demolish the other to make room for a Walgreens Pharmacy. Following the announcement that Walgreens would acquire Rite Aid in 2015, Walgreens froze the construction of all new stores, including the Derby store. Walgreens maintains building ownership, and continued the redevelopment with some changes. The plaza received a significant renovation, parking lot improvements, and realignment of one of the entrances. New retailers that joined the plaza were Crown Fried Chicken, Leslie's Pool Supply, Planet Fitness, Wayback Burgers, Jersey Mike's Subs, Sprint, and Verizon. In 2018, plans were approved for Starbucks to build a drive-through cafe in the Planet Fitness parking lot, the city's second location; in 2019, plans were approved for a Moe's Southwest Grill.

On January 12, 2018, a former Extended Care Health facility was sold to Apex International Education Partners, to be converted into dormitories for international high school students attending private schools in the area. The dormitory was opened on September 19, 2018, and at full capacity it can accommodate 110 students and 10–12 employees.

The city has a Metro-North railroad station called Derby – Shelton. The station is located at 1 Main Street and serves the residents of Derby and Shelton. Derby-Shelton is the last regular stop on the Waterbury Branch before it joins the Northeast Corridor. The station is 69.5 miles from Grand Central Terminal, with travel time being an average of one hour, 54 minutes, depending on transfer time at Bridgeport. Travel time to New Haven is an average of one hour, two minutes, depending on transfer time.

All bus routes meet at the Derby–Shelton station. The Valley Transit facility is next to the train station on adjoining property.

All content from Kiddle encyclopedia articles (including the article images and facts) can be freely used under Attribution-ShareAlike license, unless stated otherwise. Cite this article:
Derby, Connecticut Facts for Kids. Kiddle Encyclopedia.