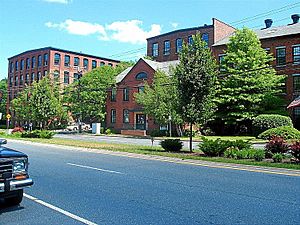 Beacon Falls is a town in western New Haven County, Connecticut, United States. It lies in the southwestern part of the state, and is bisected by the Naugatuck River. The population was 5,246 at the 2000 census. The population increased to 6,049 at the 2010 census.

Settlers from Derby, Connecticut settled Beacon Falls in 1678. The town was incorporated in 1871 on lands carved from the neighboring towns of Bethany, Seymour, Naugatuck and Oxford.

The history of Beacon Falls is tied to the series of manufacturing concerns that operated in the town's impressive brick factory buildings on North Main Street, adjacent to the Naugatuck River. The last and most successful of those concerns was the Beacon Falls Rubber Shoe Company (1898-1921). During the late 19th and early 20th centuries rubber manufacturing thrived in the Lower Naugatuck Valley. This followed the invention and 1844 patent, by Connecticut native Charles Goodyear, of a chemical process called Vulcanization to convert natural rubber into a durable, flexible, waterproof material. In the 1850s the American Hard Rubber Company built a brick factory in Beacon Falls, utilizing water power from the nearby Naugatuck River. The company made buttons, whip sockets, and powder flasks. After that company was acquired and moved to Long Island, the empty brick building was bought by the Home Woolen Company, which in the 1860s expanded and manufactured woolen shawls, popular at the time with men, women and Civil War soldiers. The Home Woolen Company thrived for 20-plus years until it became insolvent in 1887.

The 1898 inception of the Beacon Falls Rubber Shoe Company lay in the decision of Samuel J. Lewis, President of the Goodyear Metallic Rubber Shoe Co. of Nagautuck, Connecticut, and his son Tracy S. Lewis, Secretary and Treasurer of that company, to resign and start a new business together. In 1898 the two Lewis men bought the Home Woolen Company facility and started the Beacon Falls Rubber Shoe Company. The new company enjoyed great success for over two decades. From 150 pairs of shoes manufactured in 1899, by 1920 5.5 million pair were shipped; during that same time the town's population doubled. The company specialized in rubber soled boots with leather uppers (like today's "L.L. Bean" boots), and rubber soled athletic shoes with canvas uppers (now called "sneakers"). The footwear was marketed under the brand name, "Top Notch."

The Beacon Falls Rubber Shoe Company was a tremendous physical, economic, and cultural presence in Beacon Falls. It made major civic efforts to enhance the town and the lives of its employees, including building a movie theater, with an assembly room and dance hall for public use, sponsoring a musical band that gave daily performances, and commissioning the influential landscape architectural firm Olmsted Brothers to create an overall design for company lands and buildings. The resulting plan embraced the Tracy S. Lewis House and a neighborhood of workers' homes above the factory.

Tracy Lewis died prematurely in 1921 at age 47, marking the end of the Beacon Falls Rubber Shoe Company, followed by the gradual end of manufacturing at the Beacon Falls facility. After Lewis's death the company was acquired by the United States Rubber Company in Naugatuck (formerly Goodyear Metallic Rubber Shoe Co., renamed Uniroyal, Inc. in 1961), and the Beacon Falls athletic shoe was renamed "Keds." Production in the elegant brick factory buildings ended during the Great Depression in 1930, after which the buildings were used only for storage. Several buildings associated with the company, including the movie theater, were destroyed when the State of Connecticut widened the road in front of the factory in 1949, and when the Flood of 1955 (Connecticut) flooded the Naugatuck River, causing extensive damage through the valley. In 1984 the brick factory buildings were placed on the National Register of Historical Places as the "Home Woolen Company" (#84000410 -- "also known as Beacon Falls Rubber Shoe Factory"). In the late 1980s the buildings were converted to a 188-unit, full-amenity apartment complex called Beacon Mill Village. The "Depot Street Bridge," spanning the Naugatuck River across from the old brick factory, is also on the National Register of Historical Places (#07000108). Built in 1935 of riveted steel, it was designed by engineers from the Public Works Administration and the Connecticut Highway Department. The bridge joins the two parts of Beacon Falls bisected by the river.

A second major historical Beacon Falls business, where many town residents worked over the years, was the Homer D. Bronson Company. In 1884 the company moved to Beacon Falls from Waterbury, Connecticut (known as "the brass capital of the world"). The Homer D. Bronson Company manufactured a multitude of brass items, specializing in hinges used in industry and homes; automobile hood hinges were a major product. The company survived both the Great Depression and the Flood of 1955. Now named HDB Inc., its present-day website states that it has been "a leader in the engineered hinge and metal stamping markets since 1839." In 1986 the company moved to Winsted, Connecticut.

The village of Pine Bridge, once known as Pines Bridge, is located within the town, south of the town center. Beacon Falls has been known as Beacon Falls Station, Beacon Falls Village, and the Beacon Falls Postal District within Bethany.

The Beacon Falls (Metro-North station) is on the Waterbury branch of the New Haven line.

On the State Register of Historic Places

All content from Kiddle encyclopedia articles (including the article images and facts) can be freely used under Attribution-ShareAlike license, unless stated otherwise. Cite this article:
Beacon Falls, Connecticut Facts for Kids. Kiddle Encyclopedia.