Seymour is a town located in western New Haven County, Connecticut, United States. The population was 16,540 at the 2010 census. Seymour is surrounded by the communities of Ansonia and Derby to the southeast, Beacon Falls to the north, Woodbridge to the east, and Shelton and Oxford to the west.

Seymour was incorporated as a town in May 1850, and was named for Governor Thomas H. Seymour.

The area that now encompasses the lands of the town was originally part of the town of Derby. The downtown portion of what is now Seymour was eventually called Humphreysville, named after Revolutionary War hero David Humphrey, aide-de-camp to General George Washington. Humphreys had purchased a factory in what is the downtown portion of the town, which produced scythes and other tools as well as wool products from the sheep he had imported.

In 1836, Humphreysville was incorporated as a borough within the town of Derby by the General Assembly. Upon the creation of the town of Seymour in 1850, the borough government was dis-incorporated. 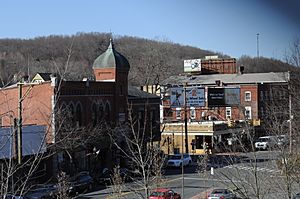 Seymour Pink is a non-profit organization in Seymour. It is an organization that helps fight against breast cancer. It donates to local hospitals such as Yale's Smilow Cancer Institute and Hewitt's Breast Cancer center at Griffin Hospital. One day in the month of October is "Seymour Pink Day" where the whole town unites and wears pink in hopes of raising money. Seymour High School's sports teams also participate in the fight against breast cancer.

They hold many events annually including:

This is a craft show that has a variety of vendors for the whole family. It has jewelry, ceramics, food concessions, and activities for kids including a costume parade, and a royal court. You can decorate pumpkins, and come and listen to music. It is usually held in late September at French Memorial Park.

Smoke in the Valley

This is a beer and chili festival that takes places in downtown Seymour that benefits local youth sports, Seymour Pink, and emergency services. It is usually held in early October. It has live music all day, chili contests and a lot of food.

This is a town-wide event that showcases Seymour’s history. It unites the town so that families can enjoy an event. It promotes town businesses, and town non-profit organizations. It also benefits the Seymour Historical Society. This helps celebrate all of the residents of Seymour, Connecticut, all while giving back to other members in the community. It is usually held in the beginning of June.

The town of Seymour hosts a Traditional holiday parade honoring the contributions of the men and women of the armed forces, past and present. It is held in downtown Seymour by the post office and train station. It is full of great floats and great music and is held on Memorial Day.

The Seymour Land Trust holds this event every Halloween. You walk through dark trails by the swamp at night, and people jump out unexpectedly at you. Anyone can participate. You come and dress up, but there is a $6 admission fee. Refreshments are sold during the event. There is a short segment for special needs and small children before the main event so that they aren't scared too much.

Every year trunk or treat is held at the Seymour Middle School parking lot. Kids from pre-K to 6th grade can come and trick-or-treat from car to car. Parents just bring a decorated car and candy to hand out, and all of the younger kids can go around. It is a safe alternative to normal trick or treating.

Every year, the town of Seymour hosts an annual Christmas parade. It is held in downtown Seymour by the post office and train station. It is full of great floats, great music, and a visit from Santa. It is usually held in late November or early December.

There are four public schools in Seymour, Connecticut. They are Seymour High School (9-12), Seymour Middle School (6-8), Chatfield-LoPresti School (pre-K-5), and Bungay School(K-5). Chatfield School and LoPresti School used to be separate, until they united into one school on the grounds of the former Paul E. Chatfield School. The school opened as one on the first day of school on September 5, 2012. The official dedication occurred on Sunday, October 14, 2012. 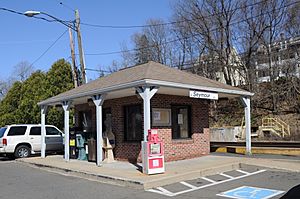 All content from Kiddle encyclopedia articles (including the article images and facts) can be freely used under Attribution-ShareAlike license, unless stated otherwise. Cite this article:
Seymour, Connecticut Facts for Kids. Kiddle Encyclopedia.