Prospect is a town in New Haven County, Connecticut, United States. It is a suburb of the nearby city of Waterbury to its north, and is on the north-eastern fringes of the New York metropolitan area. The population was estimated to be 9,401 in 2020. Prospect is part of the Waterbury NECTA and the Naugatuck Valley Council of Government. Prospect is also a member of the regional health district Chesprocott, along with Cheshire and Wolcott.

Prospect was incorporated as a town in 1827 from the South Farms part of Waterbury and the West Rocks part of Cheshire. Prospect is an exurban town, with residents often traveling to other major cities and employment centers across the state.

Prospect is known locally as being "The Best Small Town in Connecticut," with the phrase posted on the town's trucks and website. The name originates from an early 1990s article in Connecticut Magazine which ranked Prospect as the worst small town in the entire state. The measurement was done based on its school system, economy, the cost of living, crime rate and cultural resources. In response to this, the town's long-time mayor Robert Chatfield, removed the magazine from the library, and declared Prospect "The Best Small Town in Connecticut," and ordered it placed on town vehicles and bumper stickers.

Since 1969, the town of Prospect and the town of Beacon Falls have jointly operated Regional School District 16, with the first full school year having been operated in 1970. Both towns did not have access to a High School of their own, pursuant to the original intent of school district consolidation in Connecticut for small towns, and sought to consolidate their Boards of Education and begin research on the establishment of a new High School for district members. A high school would not be built in Region 16 until a 1998 referendum in the region approved the construction of Woodland Regional High School in Beacon Falls, with it opening on the 4th of September, 2001. The two towns almost dissolved the regional school district in the late 1970s over the composition of the Board of Education, poor funding, and a lower quality of education for students. The composition of the Board of Education was originally slated to be split evenly between the two towns, which was agreed upon prior to the referendum approving the merger. According to a March 1976 Supreme Court ruling which upheld an earlier decision, the principle of One man, one vote applied to the Boards of Education of regional school districts. At the time, Connecticut had 16 regional school districts, and 11 regional school districts were in conflict with this ruling, which affected 34 towns, including Prospect and Beacon Falls. Beacon Falls then attempted to dissolve the regional school district, which at the time only officially contained Long River Middle School, on the basis that the Supreme Court ruling now constituted a breach of contract between Beacon Falls and Prospect. 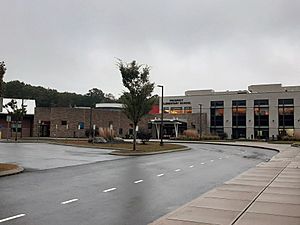 Since 2015, total enrollment in Region 16's school district has been declining, losing 192 students between 2015 and 2019. In early 2020, the Board of Education began to discuss a policy wherein non-resident students from other towns could attend school within the district, which would cost about $15,800 a student in tuition, but as of the 22 of February 2020, no further action was taken on the measure.

Funding for Region 16, which today controls and operates four schools, is based on the number of students from each town attending the district. As of 2020, the operating budget for the district was $40.7 million, with the town of Prospect responsible for $20.5 million due to the town's children making up 63.25% of the school district's student population. The town, like Beacon Falls, funds its portion of the region's budget through property taxes.

Prospect is well connected to Connecticut's wider transportation network. Route 69 and Route 68 intersect near the town centre, which provide town residents access to New Haven, Waterbury, and Union City. In close proximity to the Waterbury-Prospect line are entrances to I-84, and close to the Cheshire-Prospect border are entrances to I-691.

There are no bus routes within the town, but Bus Routes 431 and 428 of the Greater Waterbury Bus System have stops located just north of the Waterbury-Prospect on East Mountain off Route 69, and on Scott Road near the intersection with Austin Road.

All content from Kiddle encyclopedia articles (including the article images and facts) can be freely used under Attribution-ShareAlike license, unless stated otherwise. Cite this article:
Prospect, Connecticut Facts for Kids. Kiddle Encyclopedia.