Orange is a town in New Haven County, Connecticut, United States. The population was 14,280 at the 2020 census. The town is governed by a Board of Selectmen.

The Paugusset, an Algonquian people, once lived in the area that is now Orange. In 1639, the Rev. Peter Prudden purchased the land from the Indians for six coats, ten blankets, one kettle, twelve hatchets, twelve hoes, two dozen knives and a dozen small mirrors. When originally settled by English colonists, Orange was simply the northern and eastern district of the now neighboring city of Milford; however, by 1822, the population of the area had grown to the point where residents desired to form their own separate community, thus forming the town of Orange.

The town is named after William III of England, who was Prince of Orange from birth. William is remembered for succeeding James II, deposed in the Glorious Revolution of 1688. James II had been considered a despot in Connecticut; he had famously and unsuccessfully commissioned Edmund Andros to seize Connecticut's Charter.

The town continued to grow throughout the 19th century. As early as 1848, a separation of Orange and West Haven was considered. It was not until 1921 that the two were officially separated by act of the Connecticut General Assembly and the new city of West Haven was formed out of the southeastern portion of Orange. This gave the remnant town of Orange a very rural feel, as the bulk of the urbanized population was ceded to West Haven. In the post-war years, however, Orange began suburbanizing at a rapid pace.

Early roads through the area included the Boston Post Road (now U.S. Route 1) and the Derby Turnpike (now Connecticut Route 34). The turnpike was originally an Indian path. A toll road through Orange, from New Haven to Derby, was built starting in 1800. The toll house was located in Orange; tolls ended in 1887. The New Haven and Derby Railroad ran through Orange starting in 1871, with a station in Orange. At its peak, there were eleven trains per day in each direction along with one freight train. The advent of a trolley from New Haven to Derby (starting in 1904 and running until 1937) hastened the end to rail service (in 1925). Later, the construction of the Wilbur Cross Parkway and Interstate 95 brought highways through the area. 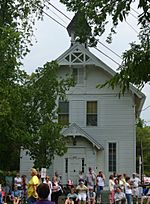 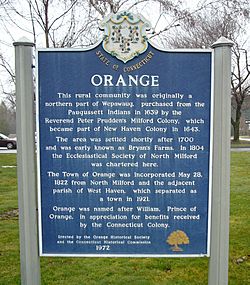 Orange exhibits its rural roots at the annual Orange Country Fair. This event originally ran from 1898 to 1912 and was revived in 1975. It has continued since then featuring horse, oxen and tractor pulls as well as exhibits of animals, flowers, fruits, vegetables and baked goods. In early August, the town also promotes the Orange Volunteer Fireman's Carnival, which raises funds to support the volunteer fire department. Both events are held at the fairgrounds at High Plains Community Center near the center of town.

Orange was the home of the first computer camp, held at the local Amity Jr. High School in 1977.

During the Cold War, Orange served as a location for the permanent deployment of Nike missiles for the defense of Greater New Haven. The former site of the Nike missiles has since served (from the late 1950s onward) as the home of the 103rd Air Control and Warning Squadron, later to become the 103rd Tactical Control Squadron and as it remains today the 103rd Air Control Squadron, a part of the Connecticut Air National Guard.

On August 18, 2005 the Orange Little League Girls softball team lost the championship game of the Little League Softball World Series to a team from McLean, Virginia.

On March 15–17, 2009, Orange hosted the 2009 ConnJam, a Boy Scout event in which over 3,000 Boy Scouts from the Connecticut Yankee Council attended events and camped over the weekend.

Orange is served by the regional Amity Regional High School in Woodbridge.

All content from Kiddle encyclopedia articles (including the article images and facts) can be freely used under Attribution-ShareAlike license, unless stated otherwise. Cite this article:
Orange, Connecticut Facts for Kids. Kiddle Encyclopedia.