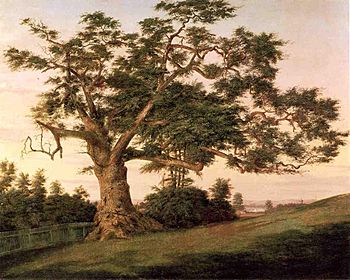 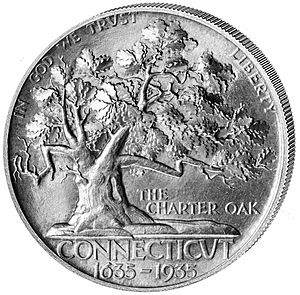 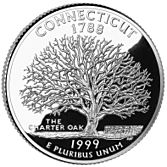 The Charter Oak on the 50 States Series Connecticut quarter

The Charter Oak was an unusually large white oak tree growing on Wyllys Hyll in Hartford, Connecticut in the United States, from around the 12th or 13th century until it fell during a storm in 1856. According to tradition, Connecticut's Royal Charter of 1662 was hidden within the hollow of the tree to thwart its confiscation by the English governor-general. The oak became a symbol of American independence and is commemorated on the Connecticut State Quarter. In 1935, for Connecticut's tercentennial, it was also depicted on both a commemorative half dollar and a postage stamp. 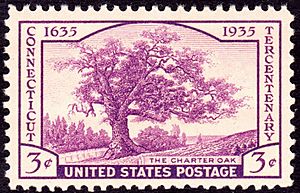 Dutch explorer Adrian Block described a tree at the future site of Hartford in his log in 1614 which is understood to be this one. In the 1630s, a delegation of local Native Americans is said to have approached Samuel Wyllys, the early settler who owned and cleared much of the land around it, encouraging its preservation and describing it as planted ceremonially, for the sake of peace, when their tribe first settled in the area.

It has been the guide of our ancestors for centuries as to the time of planting our corn; when the leaves are the size of a mouse's ears, then is the time to put the seed into the ground. 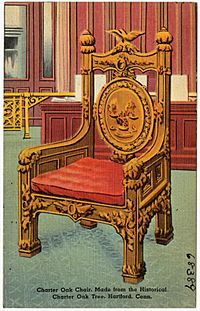 The Charter Oak Chair shown on a postcard

The oak was blown down by a violent, tempestuous storm on August 21, 1856 and timber from it was made into a number of chairs now displayed in the Hartford Capitol Building. The desk of the Governor of Connecticut and the chairs for the Speaker of the House of Representatives and President of the Senate in the state capitol were made from wood salvaged from the Charter Oak. Another chair was made by noted painter Frederic Church, a native of Hartford, and is still on display at his former home.

A cane made from a branch of the Charter Oak was presented to President Andrew Johnson by supporters in January 1868, as impeachment proceedings were underway.

All content from Kiddle encyclopedia articles (including the article images and facts) can be freely used under Attribution-ShareAlike license, unless stated otherwise. Cite this article:
Charter Oak Facts for Kids. Kiddle Encyclopedia.