Woodbridge is a town in New Haven County, Connecticut, United States. The population was 9,087 at the 2020 census. The town center is listed on the National Register of Historic Places as Woodbridge Green Historic District. Woodbridge is part of the Amity Regional School District #5, rated the #1 school district in New Haven County and the 10th best school district in CT by Niche in 2021. As of 2019 Woodbridge has the 7th highest median household income in CT.

Due to restrictive zoning regulations, 99.8% of the town's area only permits single-family housing.

In the Fall of 2021 the Woodbridge Town Planning and Zoning Commission changed town regulations and now allow applications for two family or multi family housing on all lots in Woodbridge.

Woodbridge was originally called "Amity", having been carved out of land originally belonging to New Haven and Milford as an independent parish in 1739. In 1742, the Rev. Benjamin Woodbridge was ordained in Amity, and it is after him that the modern town was named.

In 1661, the town was the location of one of the hideouts of the "Regicides" — three of the judges who signed the death warrant for King Charles I of England. The ruins of their hideout can be found on the nearby West Rock ridge, which runs along the town's eastern border.

Thomas Darling (1720–1789), a tutor at Yale College and later an entrepreneur in New Haven, moved to town in 1774. His home is now the Darling House Museum, operated by the Amity & Woodbridge Historical Association. The original farms of Woodbridge were located in the area of the West River Valley known as "The Flats".

In the modern era, Woodbridge has undergone significant suburbanization.

Woodbridge is informally divided into two distinct parts—central Woodbridge, which occupies the western hilly side of town, and the area known as The Flats, which occupies the eastern slice of town bordering the less wealthy West Rock and the New Haven neighborhood of Westville.

Neighboring towns are Bethany to the north, Hamden to the east, New Haven to the southeast, Orange to the south, and Derby, Ansonia, and Seymour to the west. 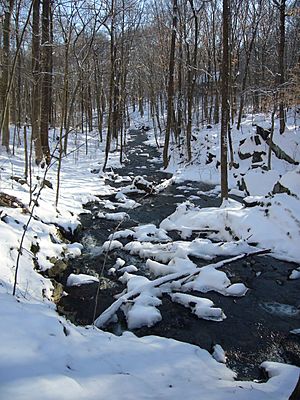 Below Wepawaug Falls in Woodbridge

Woodbridge is home to several organizations that protect undeveloped land and historic sites, including the Woodbridge Land Trust and the Woodbridge Park Association. The town has an extensive system of preserved hiking trails open to the public, notably the 93-acre (380,000 m2) Alice Newton Street Memorial Park and the 22-acre (89,000 m2) Wepawaug Falls area. Some of the land has been donated by residents.

As part of the Amity school system, Woodbridge shares a middle school with the town of Bethany, which is located north of Woodbridge.

Woodbridge also shares the Amity Regional High School with the neighboring towns of Bethany and Orange. The high school is located in Woodbridge's town center area.

Woodbridge is home to Ezra Academy, a regional Jewish day school whose students reside in 21 towns throughout New Haven and Fairfield counties.

All content from Kiddle encyclopedia articles (including the article images and facts) can be freely used under Attribution-ShareAlike license, unless stated otherwise. Cite this article:
Woodbridge, Connecticut Facts for Kids. Kiddle Encyclopedia.