West Haven is a city in New Haven County, Connecticut, United States, and a coastal city of Long Island Sound. At the 2020 census, the population of the city was 55,584. 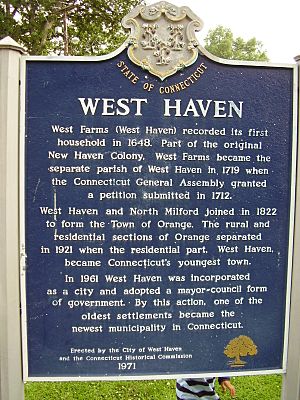 Settled in 1648, West Haven (then known as West Farms) was a part of the original New Haven Colony. In 1719, it became the separate parish of West Haven, but was still officially a part of New Haven until 1822.

During the American Revolution, West Haven was the frequent launch and arrival point for raiding parties on both sides of the war. On July 5, 1779, the British invaded New Haven Harbor and came ashore in West Haven and East Haven. Thomas Painter, a teenaged militiaman watching for the approaching British ships while standing atop Savin Rock, is depicted on the city seal. The main commercial street, Campbell Avenue, is named for British Adjutant William Campbell, at the time an ensign in the Third Guards, who rescued the Reverend Noah Williston, the local Congregational minister and outspoken revolutionary, from being bayoneted by British and Hessian troopers, after he broke his leg trying to escape his captors. Campbell then ordered the soldiers to help the minister back to the parsonage and had the regimental surgeon set his leg. Campbell is also credited with keeping the troops in reasonably good order during their march through the village and reportedly had two soldiers arrested after a local woman accused them of stealing her jewelry. Campbell was killed hours later atop Allingtown Hill on his way to New Haven by a local farmer-turned defender. Campbell is buried in the Allingtown section of town off Prudden Street. Patriot victims of the invasion are buried in the Christ Church and First Society Cemetery. A historical headstone marks Campbell's approximate gravesite and is maintained by the West Haven Historical Society. 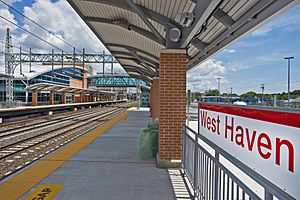 While West Haven again attempted to incorporate as its own town in 1784, that attempt failed, primarily due to the protests of neighboring Milford, which opposed North Milford becoming part of the new town. West Haven and North Milford tried again in 1786 and 1787 with the same result. The two finally joined to become Orange (incorporated as a town in 1822). In 1921, West Haven split from Orange to become a separate town. It was incorporated as a city in 1961 and is known as "Connecticut's Youngest City", but it is ironically one of the state's oldest settlements.

The Savin Rock section of West Haven was the site of the Savin Rock Amusement Park, which began in the late 19th century as a regionally renowned seaside resort. It evolved into a general amusement park in the 20th century and eventually closed in the 1960s. The park ran along the west side of the New Haven Harbor beachfront and is today a walk and bike path. Several restaurants remain as last reminders of the area including Jimmies, Turk's of Savin Rock, both for their seafood and split hot dogs and Mike's Apizza & Restaurant.

West Haven has a mayor-council form of government. Edward M. O’Brien, the city's eleventh mayor, was elected in 2013. There are three independent fire districts served by the First Fire Taxation (Center), West Shore and Allingtown Fire Districts. Over the years there have been unsuccessful efforts made to consolidate the fire districts, each of which levies its own tax rate.

In 1986, West Haven observed the Bicentennial of the United States Constitution. During the year-long celebrations, the mayor and council passed numerous resolutions to encourage community involvement, including naming the official ship of West Haven—the U.S. Navy destroyer USS Edson (DD-946)—and the city's official flower, the daylily. Public schools included curriculum on the Constitution from K-12, and school children were released from class to participate in a Constitution Day parade up Campbell Avenue. 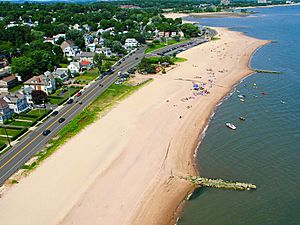 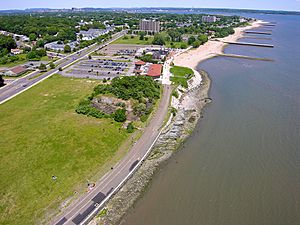 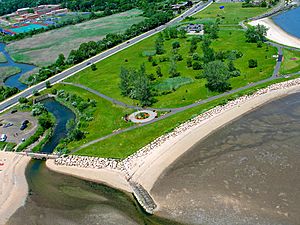 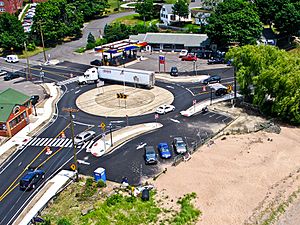 Kite aerial photo over the intersection of Jones Hill Road and Ocean Ave.

West Haven is located in the south-central portion of Connecticut's 3rd congressional district. The city is bound on the southwest by the Oyster River (the boundary between West Haven and Milford since colonial times), northwest by Orange, north by New Haven and northeast by the West River, which divides West Haven and New Haven. To the east is New Haven Harbor and to the south is Long Island Sound.

The three significant neighborhoods in West Haven correspond to the three fire districts. As communities, not all sections of the city fit neatly into these divisions. For example, the southeast corner, while part of the Center aka First Fire Taxation District, is not contiguous to the central business district. 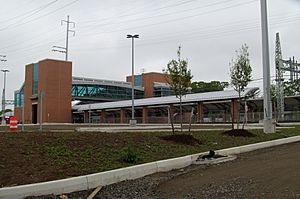 Interstate 95, Connecticut State Route 34 (also known as Derby Avenue), and U.S. Route 1 (the Boston Post Road) run through West Haven, between Orange and New Haven. Route 162, which both begins and ends at Route 1, starts in Orange, passes through West Haven, and ends in Milford. A north-south state road, Route 122, begins in New Haven, comprising Forest Road, a stretch of Campbell Avenue and First Avenue up to the junction with I-95.

Bus service is provided by Connecticut Transit New Haven. West Haven Center is served by the various 265 and 271 routes (main service along Campbell Avenue). The 265B service continues to Saw Mill Road and Bull Hill Lane; the 265R service run along Jones Hill Road and terminate at the Baybrook Shopping Center near Oyster River; the 265S service continues to Savin Rock via Second Avenue. The Route 271M/S routes run along the West Haven shore towards Milford. The Route 261 route serves the areas along Orange Avenue. The 268 route serves the Veterans Affairs Hospital (C) and Bull Hill Lane (B).

West Haven Board of Education is the local school district.

All content from Kiddle encyclopedia articles (including the article images and facts) can be freely used under Attribution-ShareAlike license, unless stated otherwise. Cite this article:
West Haven, Connecticut Facts for Kids. Kiddle Encyclopedia.